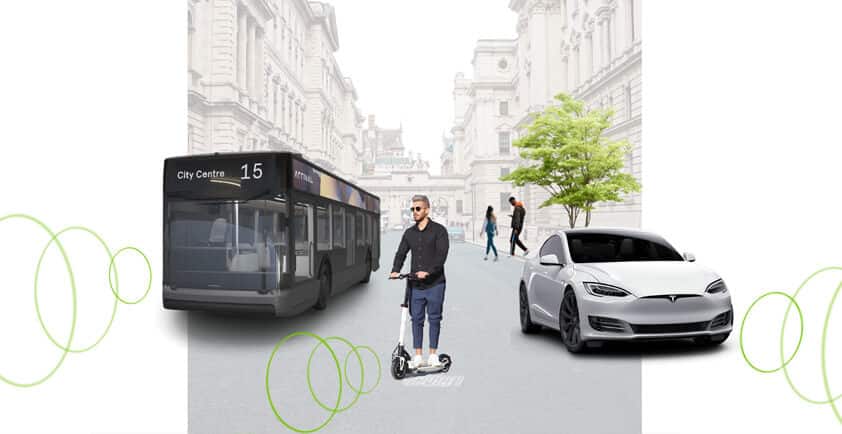 THOR AVAS : THE HAZARDS OF SILENCE - A SOUND OF HOPE

Urban mobility has been radically changing in the last few years. Thanks to the evolution of electric motors, batteries, and electronics, personal electric-powered micro, and mini vehicles are becoming more and more common, mostly in big cities. There are at least ten types of personal electric vehicles such as electric scooters, bikes, folding bikes, hoverboards, and others.

Vehicles like electric scooters are becoming a favorite choice for tourists and people who want to move fast in areas with heavy traffic.

Entrepreneurs and big companies worldwide have noticed the practicality of these vehicles and have created a new industry based on these new ways of transportation. The concept is simple: they own big fleets of personal light vehicles that they offer for rent. Customers can hire the service for an amount of time ranging from minutes to a couple of hours. The vehicles can be picked from one of the many stations these companies own, distributed over strategic points. Something appealing for the users of these services is that, in most cases, they don’t have to return the vehicles to a station; they can leave them parked anywhere and the companies pick them up and take them back to one of their stations to be rented again.

There are also many people who prefer to buy these vehicles and use them whenever they feel like it. These kinds of vehicles are becoming popular among users of all ages.

The idea seems great; these new ways of transportation are eco-friendly in many ways: they have zero emissions, they help to reduce noise pollution, they help to relieve public transport and traffic at all times, they allow people to arrive at their destinations faster, and so much more.

However, as is the case with every new means of transport, there are many loopholes or lack of legislation around this issue. There aren’t clear rules yet or set speed limits, so users run these vehicles on the sidewalks or on the roads and streets without minding the consequences this could have for others. There are many other gray areas about these vehicles, such as what is the legal age to be allowed to drive them.

Another controversial point is that most of these vehicles don’t require a driver’s license.

Another big problem about these vehicles is that they are too silent to hear them coming.

This increases the chances of accidents and is one of the main causes of casualties involving micro-mobility micromobility vehicles. A study conducted by the U.S. Consumer Product Safety Commission revealed that over the past four years, and only in the USA, injuries caused by accidents involving battery-powered vehicles increased by 70% over the past four years. In that period, almost 200,000 emergency room visits and more than 70 deaths were due to the indiscriminate use of these vehicles and to the fact that people don’t see them as a hazard. Despite their relatively low high speed, e-scooters are among the most dangerous vehicles for pedestrians, other vehicles, and their own drivers.

In Europe, the situation is not much different. In Paris, Mr. Belliard, the city’s Deputy Mayor for Transport, said that e-scooters may be banned in October this year. This is because the death of four pedestrians last year raised concerns among many citizens and governmental authorities. Mr. Belliard asked for a meeting with the owners of three e-scooter rental companies to discuss their contracts and to demand that they set speed limits and parking rules. The fact is that these vehicles’ speed is already limited to 20 and 10 km/h, depending on the area in which they are circulating, but this is not enough to prevent fatal accidents.

In other European cities, like Oslo and Stockholm, there are also great concerns about the safety of these vehicles. In the UK only in 2020 there were 460 accidents involving e-scooters, with 483 casualties and one death. As a temporary solution, the authorities of some cities have reduced the number of e-scooters on the streets while they try to find a permanent solution to minimize the number of accidents.

In short, reckless riding, not wearing a helmet, brake and mechanical problems, and the silence of electric motors are a lethal combination.

The saying “history repeats itself” can’t be truer in this case. After the invention and popularization of cars, there were many accidents. Yet the cars weren’t to blame; most of the problems had to do with lack of clear rules, legislation, conventions, proper roads, and pedestrians not being used to the new vehicles. 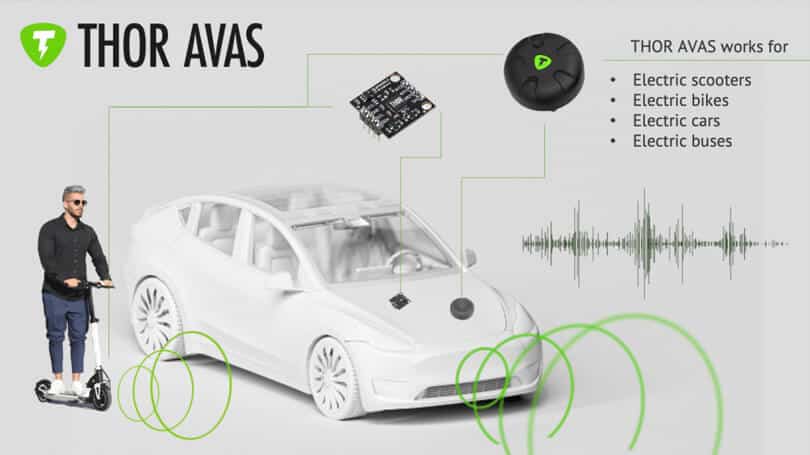 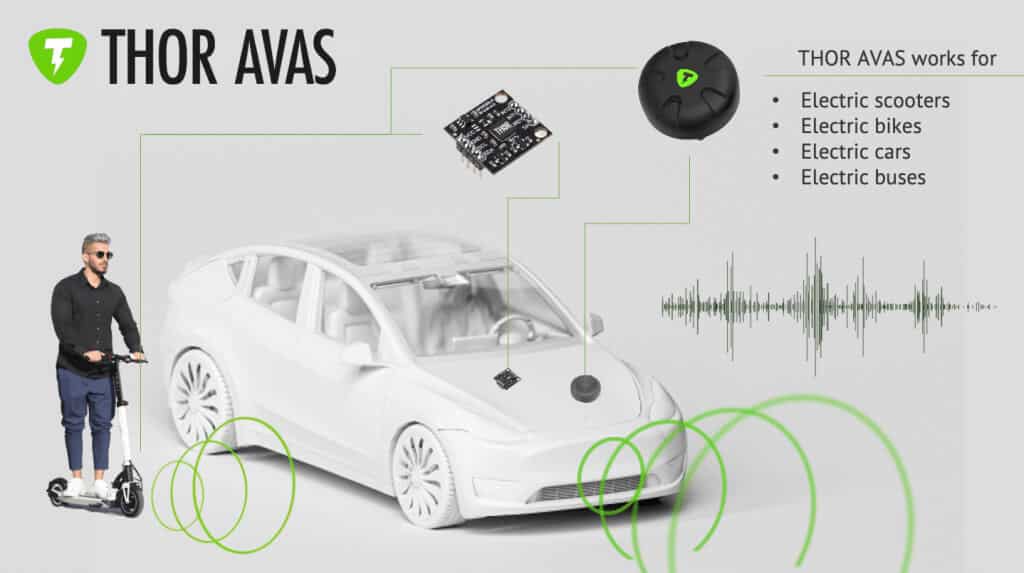 Almost 100 years later, humankind is facing the same problem again: a new and popular manner of transportation that is evolving faster than the rules to use it safely.

However, there is something that can be done to make these vehicles safer right now, while governments, manufacturers, and rental business owners reach an agreement.

Silence is wonderful to make any electric vehicle, including cars, more eco-friendly, but it is extremely dangerous for pedestrians, especially for the blind and visually-impaired, and animals, as mentioned before.

This problem has an immediate solution: “artificial engine sound” or AVAS (Acoustic Vehicle Alerting Systems). Thor, for example, is a company with years of experience in sound systems and vehicular safety which has developed a very interesting solution for this problem. They invented an advanced sound system that includes speakers, electronics, and software to provide any electric vehicle -cars, e-scooters, e-bikes, mopeds, and others- with a recognizable sound.

THOR AVAS systems are based on high-quality sampled sounds that vary depending on parameters like speed, gas pedal position, location (urban/suburban), time of the day, and more. Thor AVAS works in compliance with international regulations such as UN R138, FMVSS No. 141, GB/T 37153-2018, which means that their systems are loud enough to alert pedestrians and other drivers that a vehicle is coming, but quiet enough to avoid noise pollution.

Thor has an excellent AVAS system for light electric vehicles. Their system doesn’t work just as a “beep” or a simple warning; they have great sound presets that can make a small vehicle roar like a big V8 engine or they can make it sound like a futuristic spaceship. The system can be linked to any smartphone and the user can browse through a wide sound library.

Another interesting feature is that they offer customized sounds for e-vehicle fleets.

Rental companies can have unique and personalized sounds for their light electric vehicles, which will make them stand out from their competitors as they are solving part of the road safety problem. Another interesting fact about Thor AVAS is that the sound library can be updated online. This means that if any Transportation Authority asks for a new sound, announcement, or warning, users will be able to just download the sounds thus complying with the new regulations.

Why wait for the governments to enforce new laws and the use of AVAS systems when the technology is already available? A Thor AVAS system will do more than make small e-vehicles safer; it will make them more pleasant and fun to ride.

ZEEKR AND WAYMO TO COLLABORATE ON ALL-ELECTRIC, AUTONOMOUS RIDE-HAILING VEHICLE

Geely premium electric brand, Zeekr, will collaborate with Waymo on the ..

Arrival, pioneer of a unique new method of design and production of ..

DESIGNED TO DELIVER: BRINGING THE BENEFITS OF OUR 5TH GENERATION HARDWARE TO TRUCKING