At the very beginning of this year — before 2020 became “2020” — we revealed the Cruise Origin. The Origin is our self-driving, all-electric, shared vehicle of the future. We believe it’s not just the future of our company, but the future of transportation.

But just as the conversation started, it was shut down, along with most of the world.

COVID-19 changed everything, including the way many people think about shared vehicles. Sharing anything, it now feels, is a threat to our health.

And yet the Origin was designed specifically to improve our health — the health of our lives, our cities, and our planet. Along with our partners at General Motors and Honda, we purpose-built the Origin to completely rethink the role of the car, which for over a hundred years has been causing some of our worst and most stubborn problems. None of which are getting any less urgent during the time of COVID. In fact, some of them are getting worse.

In the U.S. alone, almost 40,000 people die and 4.4 million are injured every year in car crashes. As roads briefly cleared during the spring and summer of 2020, people sped up for lost time, and those fatality numbers increased to their highest rate in 15 years. The Origin’s sole function is to provide smooth, safe and accessible transportation, without any of the distractions, impulses, or impairments of a human driver.

The Origin is also electric — thanks to GM’s Ultium system, which testing indicates million-mile battery life is achievable — powered by 100% renewable energy. And yet gasoline-powered, single-occupant car buying also increased during the pandemic, especially in cities, where the inside of a new car became another defense against close contact with the unknown. Once COVID restrictions ease, and all these new cars converge on our roads along with all the old cars, CO² emissions will increase, as will bad traffic.

The Origin can replace many of these cars, decreasing both congestion and greenhouse gasses, but only if people feel safe enough to share a ride. And right now, the thought of getting into a vehicle with a stranger can be seen as a scary proposition. 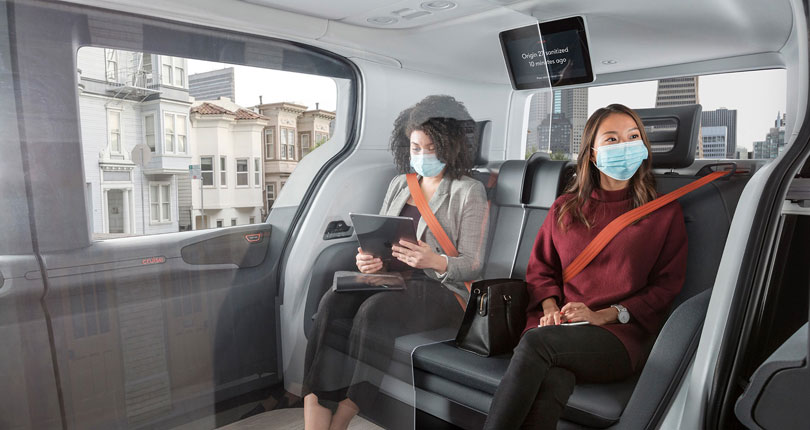 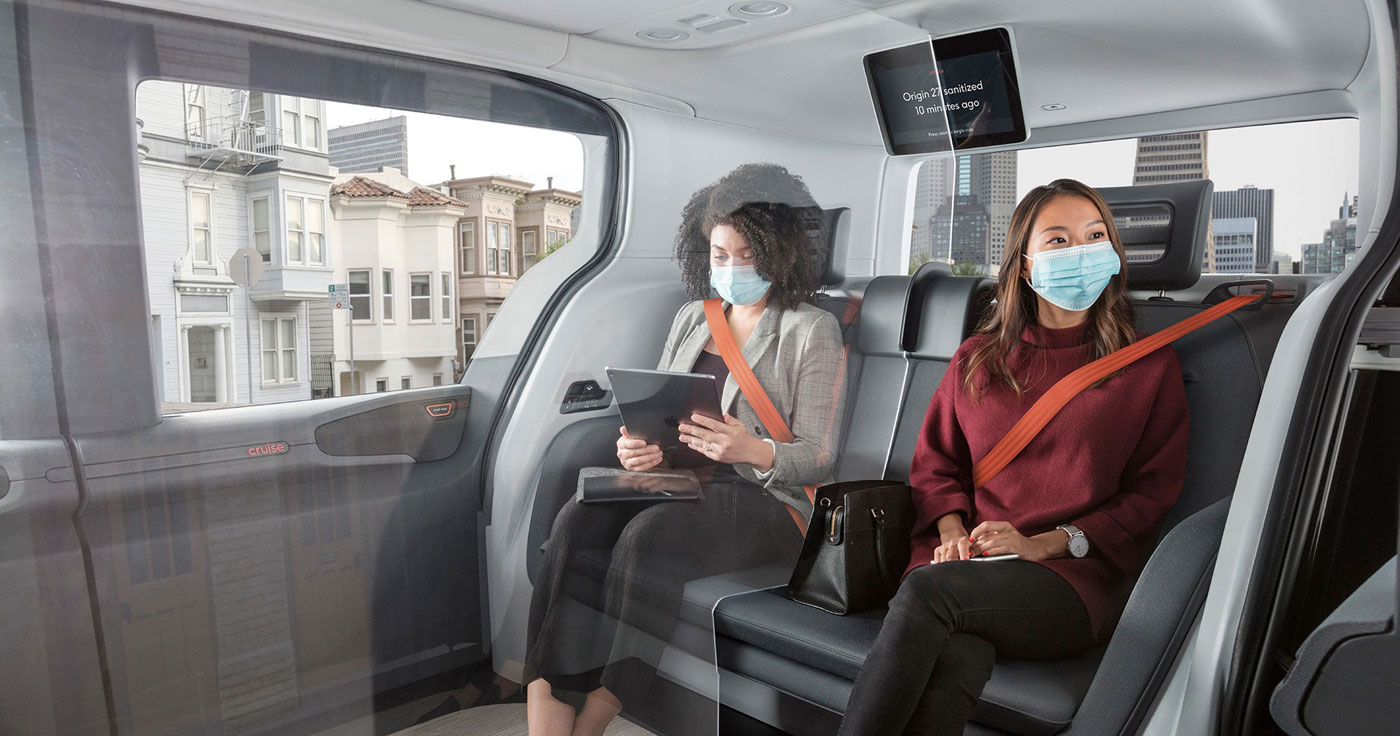 The good news is that we had already been thinking about how to minimize the risk of contagion inside the Origin (after all, people transmitted viruses before the pandemic, too). And because it doesn’t have any manual controls, touchpoints that could spread germs were already at a minimum.

But as this virus spread across the globe, we realized we needed to do more.

From the minute that “COVID” became a household name, our teams worked with a Harvard-trained epidemiologist to rethink both the interior of the Origin, as well as the riding experience. Along with research from the World Health Organization (WHO) and U.S. Centers for Disease Control (CDC), they developed a set of solutions for the Origin that will be highly effective in reducing the spread of the virus.

Thanks to an already spacious cabin, we were able to avoid energy hungry methods like UV-C light, in favor of an elegant, clear barrier that would have felt extremely claustrophobic in a traditional car. In addition to the barrier, which will completely isolate each person, we will limit the vehicle to two passengers at a time. Our custom venting system will also safely increase air circulation.

While the pandemic persists, every Origin will also provide hand sanitizer and wipes, and require masks to be worn by all passengers. An already robust cleaning schedule will be increased to ensure our riders are completely confident that their shared ride of the future is as safe as possible. Even in a pandemic.

This year has shown all of us that partial commitments and half steps are not enough.

If we want a better, cleaner, safer, and more affordable complement to our public transportation systems, we have to be relentless in our pursuit of the vehicle of tomorrow, rather than the car of today.

To that end, we’re going all in on our commitment to getting the Origin onto the roads of our cities. Our teammates at GM are making rapid progress tooling up Factory Zero in Detroit where the Origin will be built. And because the Origin does not have driver controls like a traditional car, in the coming months GM and Cruise will be filing an exemption petition with the National Highway Traffic Safety Administration (NHTSA) seeking regulatory approval for its deployment. Accordingly, we’ll be withdrawing an earlier exemption petition that was limited to Cruise AVs derived from the Chevrolet Bolt platform.

Few could have imagined 2020 turning out the way it did. We certainly never expected that our test vehicles would be keeping people safe and connected by making over 100,000 food deliveries during a global pandemic. But that’s exactly what happened. And it opened our eyes to the even greater potential for the Origin to drive change.

So with the benefit of 2020 hindsight, we are all in for what’s next.

2020 has been a heap of bad. And not small bad either. As we’ve been stuck at home, viewing the world through either real or virtual windows, every bit of depressing news has felt magnified.

Like many of you, I looked through my window a few weeks ago and saw climate change up close and personal. No longer subtle or abstract, it was bright orange and everywhere. The problem suddenly seemed more massive and immediate than ever.

And while the planet is on fire, the culprits are literally rolling up and down my street. Single occupant, human-driven, gasoline-powered cars are the second largest contributors of greenhouse gases on Earth.

We need big solutions. And we need them now.

But big solutions to intractable problems aren’t just hacked together overnight. Moonshots take an unwavering commitment over a long time, while riding cycles of expectations that swing wildly from hype to disillusionment.

From time to time, though, there will be small but significant moments where the impact and promise of those years of effort show themselves in a very tangible way.

And in that spirit I’m excited to share that we’ve reached one of those moments just now.

Today, Cruise received a permit from the California DMV to remove the human backup drivers from our self-driving cars. We’re not the first company to receive this permit, but we’re going to be the first to put it to use on the streets of a major U.S. city.

Before the end of the year, we’ll be sending cars out onto the streets of SF — without gasoline and without anyone at the wheel. Because safely removing the driver is the true benchmark of a self-driving car, and because burning fossil fuels is no way to build the future of transportation.

It will be a low key, quiet moment. But the echo could be loud.

I get it — the drama of this might be hard to appreciate. All anyone will see is a car, silently driving by itself through the city. Not speeding. Not crashing. Just quietly cruising. (Truthfully, I sometimes wish that safe driving could be as visceral as a rocket launch — our videos would be more exciting, and I could write fewer blog posts.)

But even without a literal launch into the sky, this is our moonshot. And the chaotic, gritty streets of SF are our launchpad. This is where years of blood, sweat, and tears have been poured out by everyone on the Cruise mission. And it’s where over two million miles of city testing will truly hit the road for the first time: an electric car, driving by itself, navigating one of the most difficult driving cities in the world.

And while it would be easier to do this in the suburbs, where driving is 30–40 times less complex, our cities are ground zero for the world’s transportation crisis. This is where accidents, pollution, congestion, and lack of accessibility collide. Often quite literally.

And that echo I mentioned?

The pandemic has seen the killing of Americans on our roads accelerate to the fastest rate in 15 years. Less traffic caused people to drive like idiots. More speeding, drinking and drugs. Fewer seatbelts. Self-driving cars will save millions of lives.

City dwellers, in a sad twist on social distancing, are now buying more cars than ever. Traffic won’t just come back, it will suck worse than ever. But self-driving cars, which can be shared safely and efficiently, will reduce congestion dramatically and permanently.

The impact on our cities, our world, and our climate will be real and sooner than you might think.

But for today, I’m going to celebrate this one moment — this small but significant step on our own mission to the moon.

And in the months ahead, if you happen to see any of our cars out on the road, go ahead and wave. There might not be anyone inside, but they see you too, and appreciate your support as they drive change for us all.

Today, we are proud to share that Nuro has become the first company to receive a permit to deploy autonomous ...

Motional’s next generation, state-of-the-art vehicles will be integrated, operationalized and deployed on ...

Now that we’ve opened up our fully autonomous ride-hailing service to ...

Scaling Robotaxis to Those Who Need It Most. We are excited to announce that Voyage is teaming up with First Transit to deploy and ...