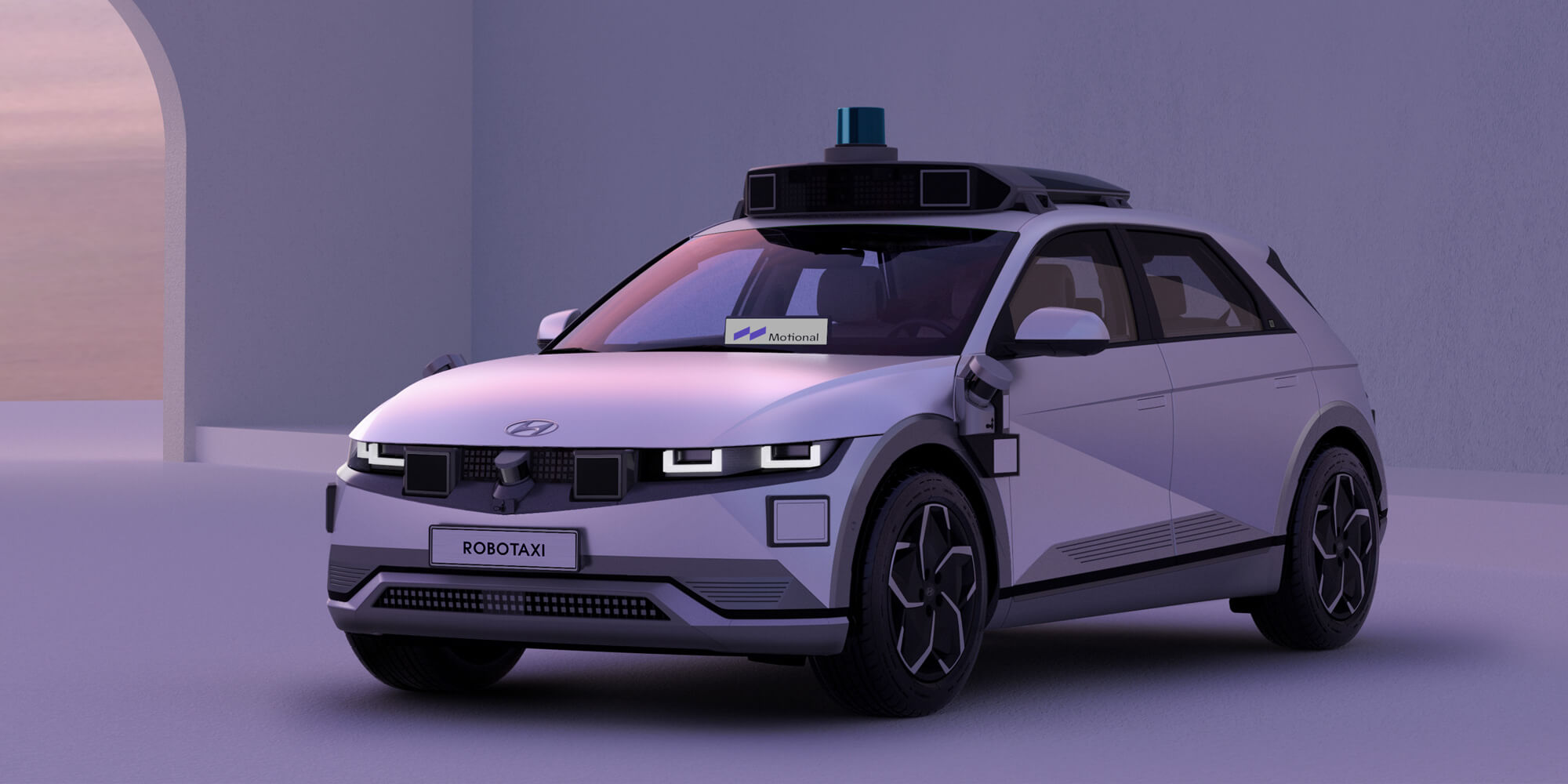 Today, Motional and Hyundai Motor Group (the Group) unveil the IONIQ 5-based robotaxi (here after referred to as IONIQ 5 robotaxi), Motional’s next-generation robotaxi.

Based on the all-electric Hyundai IONIQ 5, which launched to worldwide acclaim earlier this year, the IONIQ 5 robotaxi is an SAE Level 4 autonomous vehicle that can safely operate without a driver. It’s a zero tailpipe-emissions robotaxi and represents the convergence of the two most transformative technologies in mobility: electrification and autonomy. The fusion of these technologies can make transportation smarter, safer, and more sustainable.

The IONIQ 5 robotaxi features a technology-driven design that celebrates the innovation behind the autonomous operation. The vehicle’s sensor suite is prominently displayed across the exterior, easily distinguishing the robotaxi from human piloted vehicles. The robotaxi has more than 30 sensors - a combination of cameras, radars, and lidar - that provide robust 360-degree perception, high-resolution images, and ultra-long range detection of objects for safe autonomous operation in diverse driving environments. The robotaxi will be outfitted with Motional’s proven driverless technology, which includes advanced machine learning systems — trained on decades of real world data — that enables the vehicle to safely navigate challenging and complex driving situations.

Based on the Electric Global Modular Platform (E-GMP), Hyundai Motor Group’s dedicated battery electric vehicle (BEV) platform, the IONIQ 5 robotaxi’s interior provides passengers with a spacious, comfortable place to work, relax, or socialize during their driverless ride. The interior will also feature a suite of rider-focused interfaces to allow passengers to intuitively interact with the vehicle during their ride, such as directing the robotaxi to make an extra stop. The resulting passenger experience will set a new standard for driverless ride-hailing.

Built from the ground-up to be fully driverless, the IONIQ 5 robotaxi was created through partnership between Motional and Hyundai Motor Group. The two companies worked hand-in-hand throughout the development, with each providing critical expertise: Motional in driverless technology and Hyundai in R&D capabilities and global vehicle manufacturing.

The end result is a seamless integration between the vehicle’s brain and body, with the hardware and autonomy working in sync for highly advanced, safe, and capable driverless operation. The IONIQ 5 robotaxi is built on the Group’s E-GMP, for ultra-fast charging and long-range driving, enabling the maximum utilization of Motional’s robotaxi fleet. The IONIQ 5 robotaxi also comes with the Group’s advanced safety and reliability, and is globally scalable, uniquely positioning the robotaxi for cost effective commercialization.

“This robotaxi represents Motional’s vision of a driverless future becoming a reality,” said Motional President and CEO Karl Iagnemma. “Through our strategic partnership with Hyundai Motor Group and Aptiv, we have unparalleled automotive and software expertise across our entire vehicle development process. This deep collaboration enables us to manufacture a robotaxi that’s both highly safe and reliable, and is cost-optimized for global production. We’re focused on mass commercialization, and the IONIQ 5 robotaxi is built for that purpose.”

Motional and the Group’s emphasis on passenger safety and comfort is evident throughout the vehicle. There are safety redundancies across every function, such as the navigation, steering, braking, and power, for a safe and smooth ride every time. Motional will also be able to provide Remote Vehicle Assistance (RVA) to the IONIQ 5 robotaxis should they encounter an unusual road scenario, such as road construction or flooding. In such an event, a remote Motional operator could instantly connect to the vehicle and direct it to a new path. 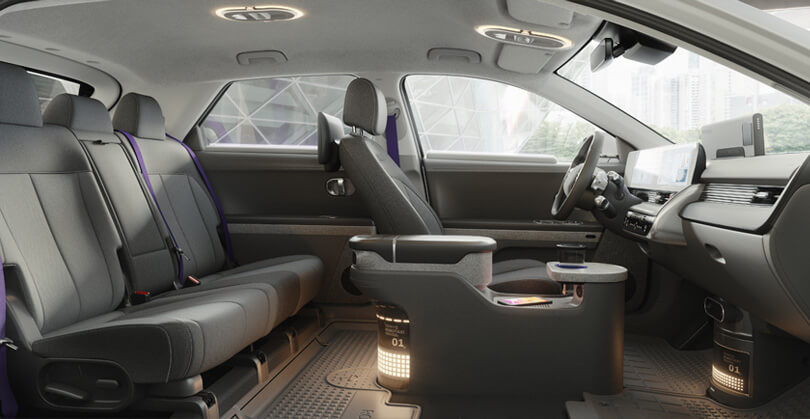 “Hyundai Motor has evolved its IONIQ 5, a battery electric vehicle built on its EV-dedicated platform, into a platform for fully autonomous vehicles,” said Woongjun Jang, Head of the Autonomous Driving Center at Hyundai Motor Group. “For the IONIQ 5-based robotaxi, we have applied various redundancy systems, in addition to a suite of essential technologies to ensure safety and convenience of the passengers. By successfully integrating the Group’s IONIQ 5 robotaxi with Motional’s autonomous driving technology, we are proud to announce that we have achieved another important milestone on the road to the commercialization of our robotaxi.”

A Leader in Commercial Robotaxi Services

Motional formed in March 2020 as an autonomous driving joint venture between Hyundai Motor Group, one of the world’s largest vehicle manufacturers offering smart mobility solutions, and Aptiv, a global industrial technology leader in advanced safety, electrification, and vehicle connectivity. Motional was created to advance the development and commercialization of the world’s highest-performing and safest autonomous vehicles.

Motional’s team has decades of expertise in driverless technology and unrivaled experience in operating commercial robotaxi services. The company has moved hundreds of thousands of consumers through its self-driving service on the Lyft network in Las Vegas, the world’s most-established public robotaxi fleet, and is the only one in its industry to partner with two major ride-hailing companies: Lyft and Via. It’s with this invaluable experience that Motional enters the next phase of its commercial roadmap when it launches a fully driverless service, starting in 2023, on the Lyft network. The IONIQ 5 robotaxis will be deployed in multiple U.S. markets, marking a turning point for driverless technology and laying the foundation for making robotaxis a global reality.

As Munich gears up to host its very first IAA Mobility conference, Argo AI and its partners at Volkswagen ...

All-electric, self-driving vehicles in San Francisco and family-owned farms in ...

The last letter in our logo appears as if it’s in motion, driven towards a fixed goal.

WAYMO - TRANSFORMING MOBILITY WITH THE CONFIDENCE OF WORLD-CLASS INVESTORS

As we build, deploy, and commercialize the Waymo Driver, it’s gratifying to see ...

Today, we are releasing our second Safety Report. It focuses on how we’ve designed and incorporated over 100 safety innovations ...

Ryder maintenance facilities in the Southern U.S. to serve as terminals ..

General Motors announced today it will invest $300 million in Momenta to accelerate the development of next-generation self-driving ..

Oxbotica and AppliedEV have announced a collaboration to develop a ...