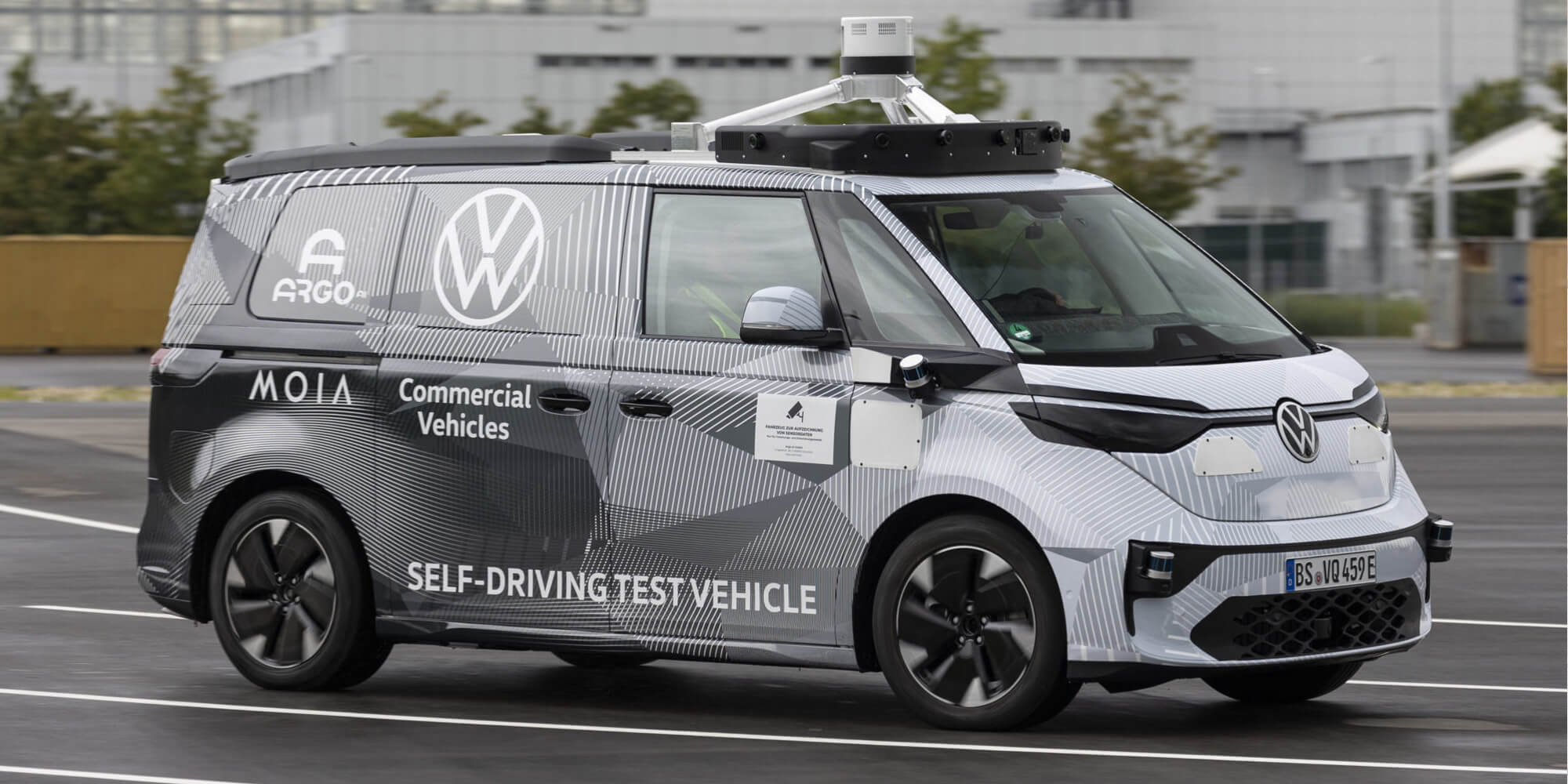 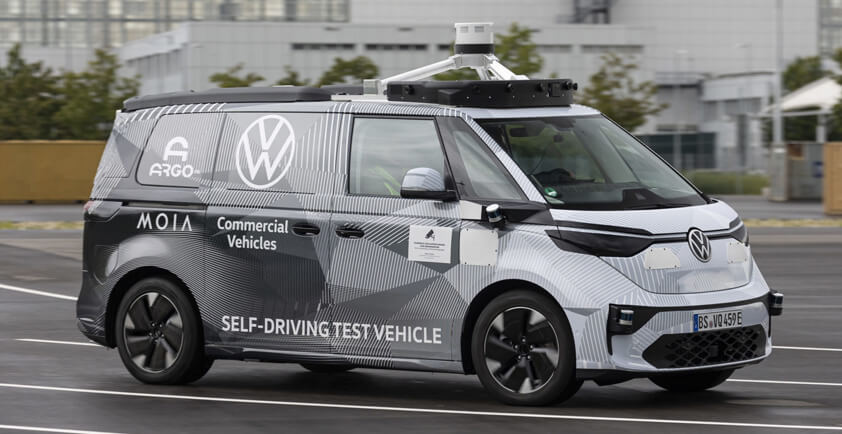 As Munich gears up to host its very first IAA Mobility conference, Argo AI and its partners at Volkswagen are ramping up testing and development of the all-electric ID. BUZZ AD (Autonomous Driving) in preparation for the launch of autonomous services in Germany and beyond.

At this year’s IAA, Argo and VW will debut the first-generation model of the ID. BUZZ self-driving test vehicle, a retro-futuristic van that will be the first Volkswagen Group vehicle with SAE Level 4 automation capabilities. The vehicle is currently being tested on Argo’s brand new closed-course track at Franz Josef Strauss International Airport in Munich and will soon be deployed on the public streets of Munich itself. The goal is to deliver self-driving ID. BUZZ vehicles for commercial services in the city of Hamburg in 2025, with autonomous ride-pooling services to be run by VW’s subsidiary MOIA, a mobility as a service (MaaS) provider.

To meet these milestones, Argo is busy expanding its operations in Munich, with the current global team hailing from 33 different nations. In tandem with colleagues in the United States, Argo’s global team is working literally around the clock to integrate the Argo self-driving system (SDS) into VW’s all-electric ID. BUZZ, learning, iterating, and making critical progress as they go.

The Birth of the ID. BUZZ

After receiving the base vehicle early in 2021, the Munich team embarked on a months’-long process of testing and SDS hardware and software integration in preparation for unveiling the ID. BUZZ autonomous driving test vehicle this year. “As Argo’s first fully electric vehicle and VW’s first self-driving vehicle, this is a case study in intercontinental teamwork,” says Argo founder and CEO, Bryan Salesky.

Testing that begins as the morning dawns in Munich on Argo’s test track, continues as the sun goes down across the Atlantic, allowing Argo engineers to continuously improve the SDS no matter their time zone.

The net result reflects this collaborative effort, with the ID. BUZZ AD showcasing both Argo’s advanced suite of sensors and meticulous approach to testing, with VW’s innovative MEB platform, which underpins all of the company’s electric vehicles. Along with the Ford Fusion and Ford Hybrid Escape, the ID. BUZZ represents the third vehicle platform integrated with the Argo SDS.

Argo has worked closely with Volkswagen on the vehicle’s build-out, with countless discussions ranging from how to keep computing components cool without throwing off the vehicle’s power budget, to where to place sensors for maximum visibility. Volkswagen’s choice of design for the ID. BUZZ opened countless doors for innovation and problem-solving.

“One of the major differences of the ID. BUZZ compared to a normal car is the roof, which is huge, and provides a lot of flexibility for integrating Argo Lidar and other sensors,” says Arndt von Bieren, a senior hardware engineering manager at Argo. “In close collaboration with Volkswagen we have managed to arrange the cameras and radar in a beautifully designed tiara around the lidar.”

“Following the Sun” from Munich

Since joining Argo AI in 2020, the Munich team has been hard at work with product development and fleet organization, working on everything from machine learning infrastructure and analytics to virtual testing tools. Argo is now in the middle of an ambitious growth phase in Europe, highlighted by a recruiting push across areas that include autonomy runtime, product development, and fleet operations.

But the activity isn’t confined to their Munich offices. Argo recently unveiled their new test track on the grounds of the Munich International Airport, with a second, larger track in the planning stages. Here, they are able to conduct motion control and planning tests as well as specialty testing for Argo Lidar. Autonomy testing is facilitated through the incorporation of regional road conditions, including unique parking scenarios, European-style roundabouts, European signs and painted road signals, and driving on both narrow and wide streets.

The track also offers the potential for fleet-operations training for certified autonomous vehicle operators. As with software development, Argo now has “follow the sun” testing capabilities which effectively doubles their progress within a 24-hour period, The team at the Munich test track can now convey test results to the track engineers in Western Pennsylvania, who can then examine data and provide additional insights, even as the Munich team heads off to bed.

With the test track up and running, Argo now supports two international markets in Germany and the U.S., which have different traffic conditions, right of way rules, and so on. “We have to be able to test those critical points nearly 24/7, and the faster we can do that, the faster we can get the vehicles on public roads, and the faster we get to a commercial release,” says Thomas Bock, Head of Fleet Operations for Argo in Europe.

The action in Munich also marks the start of an ambitious program for Volkswagen and Argo in Hamburg, which will soon lead to the first integration with VW’s ride-pooling service MOIA. Since 2017, MOIA has developed and launched Europe’s largest fully electric ride-pooling system, enhancing mobility for over 4 million passengers.

In Hamburg, Argo is making use of broad government support, forward-thinking mobility initiatives, a dedication to road safety, and imperfect weather conditions, which give Argo developers ample opportunity to learn and evolve autonomous-driving capabilities.

Reinhard Stolle, VP of Engineering at Argo, says that the key is to go out and learn from experiences in Hamburg, building off of the testing Argo is already doing in six major U.S. cities. Armed with a fresh trove of driving scenarios, Argo’s commercial services can then expand to other European cities, each of which have a different driving culture, different rules of the road, and different geographies and climate conditions. “Traffic signs are different or may have a slightly different meaning,” he says. “There are also subtle things like the behavior of the traffic participants. In some cities you have a more relaxed driving style, and in other cities, not so much.”

By opening the doors to autonomous ride-pooling services, cities can remove demand for parking spaces and another substantial source of traffic congestion, the number of people driving around looking for a free parking spot. “If we add this transportation option, it complements other transit options, and opens up the last mile from a public transit hub to a home or an office,” Stolle says.

The unique form factor of the ID. BUZZ makes it ideal for a commercial ride-pooling service on multiple levels. “From an interior perspective it’s a luxurious, comfortable interior compared to other vehicle types, and you can carry more people with a larger vehicle—that’s what the ID. BUZZ provides,” says Adrian Boeing, Program Director at Argo AI.

There’s another strategic benefit to the size of the ID. BUZZ. “Having a large, roomy vehicle type also opens up new markets like goods delivery,” says Boeing. Plus, it’s an electric vehicle, which will appeal to both ride-pooling and delivery customers interested in sustainability.

“Consumers are going to love this vehicle when they get to experience it,” adds Salesky. “We’re eager to put it to the test in Germany, and really show what the ID. BUZZ is capable of.”

All-electric, self-driving vehicles in San Francisco and family-owned farms in ...

ZEEKR AND WAYMO TO COLLABORATE ON ALL-ELECTRIC, AUTONOMOUS RIDE-HAILING VEHICLE

Geely premium electric brand, Zeekr, will collaborate with Waymo on the ..

Arrival, pioneer of a unique new method of design and production of ..

DESIGNED TO DELIVER: BRINGING THE BENEFITS OF OUR 5TH GENERATION HARDWARE TO TRUCKING

General Motors announced today it will invest $300 million in Momenta to accelerate the development of next-generation self-driving ..

Oxbotica and AppliedEV have announced a collaboration to develop a ...