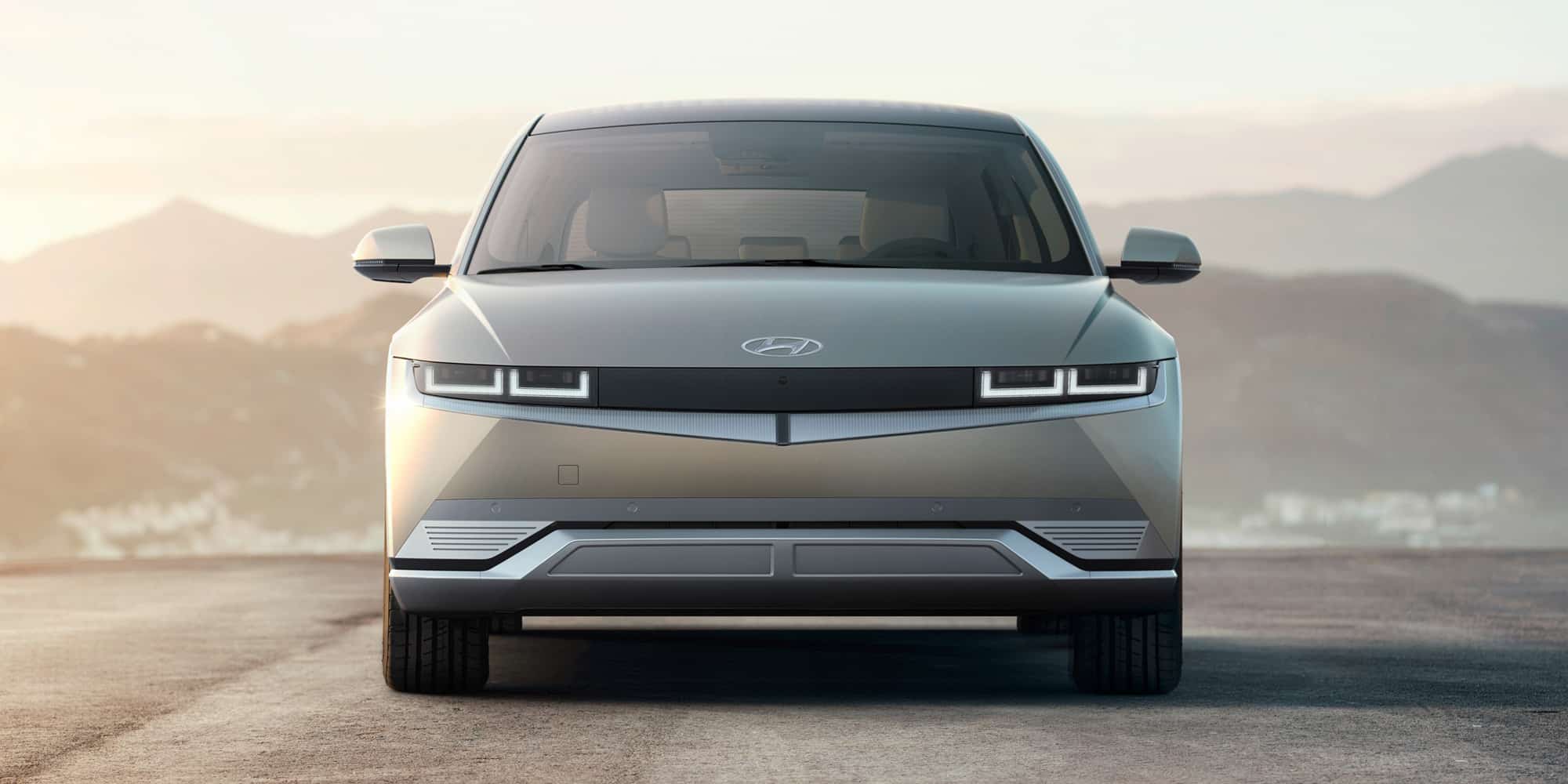 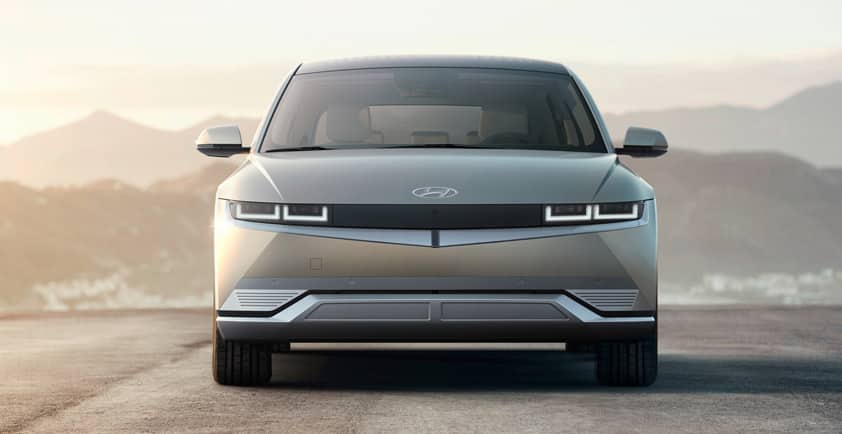 In late 2020, we shared game-changing news: Motional and Lyft inked the world’s largest robotaxi deployment partnership — a deal that has the potential to make driverless vehicles a reality for millions of Americans. Starting in 2023, consumers in select markets will be able to book a Motional robotaxi through the Lyft app. For many, this will be their first experience with driverless technology.

Today, we unveil a key part of that experience. We’re excited to announce that the celebrated Hyundai IONIQ 5 will be the vehicle platform for Motional’s next-generation robotaxi.

Recently unveiled to critical acclaim, the futuristic IONIQ 5 is an all-electric, midsize crossover utility vehicle designed for the passenger experience. With a unique and luxurious living space and a sleek, modern exterior, Motional and Lyft riders will experience their fully autonomous rides in comfort and style. Built on Hyundai’s dedicated battery electric vehicle (BEV) platform, the IONIQ 5 delivers innovation in both mobility and sustainability.

This isn’t the IONIQ 5 consumer model: Motional’s IONIQ 5 will be equipped with Level 4 autonomous driving capabilities. It’s the first robotaxi under the Motional name — and is the product of deep collaboration between Hyundai’s world-class manufacturing and design teams, and Motional’s autonomy, robotics, and software teams. The platform is the convergence of mobility’s two most transformative technologies — electrification and autonomy — and signals the future of transportation. 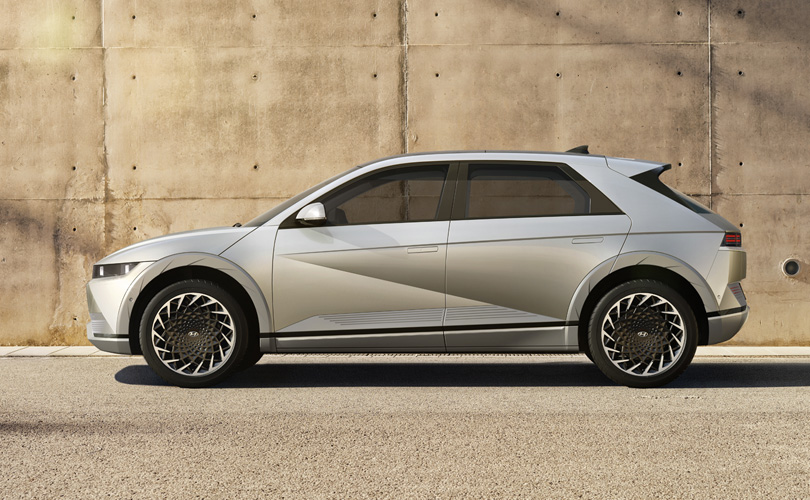 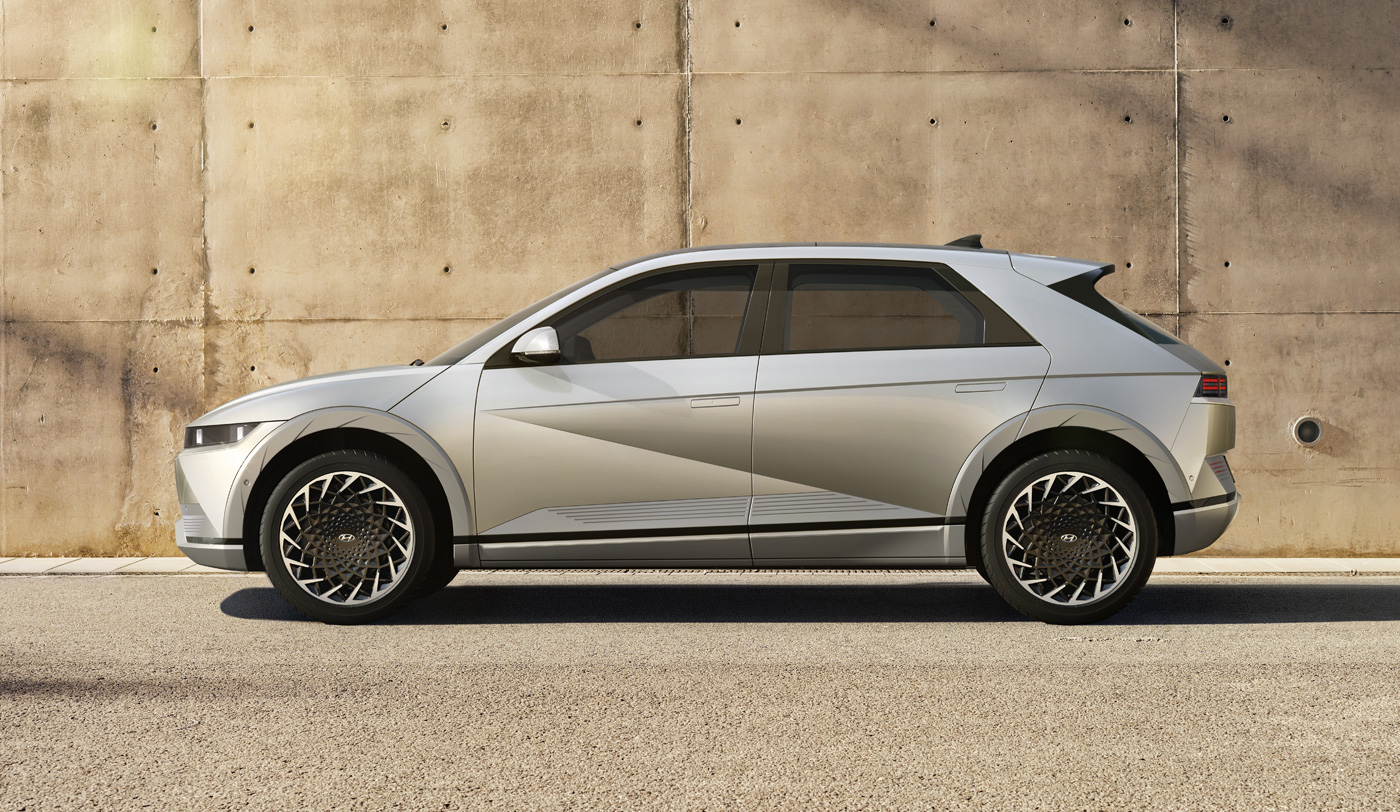 > The IONIQ 5s are being fully integrated with Motional’s driverless system. This integration is critical for the transformation of the IONIQ 5 into a robotaxi and is achieved through close collaboration between Hyundai and Motional. As a result of this collaboration, the robotaxi will be both automotive production grade and internationally scalable.

> Motional’s autonomy experts are adding technology that will allow the robotaxi to see and respond faster and more safely than a human. LiDAR, radar, and cameras sense a full 360 degrees around the robotaxi, seeing up to 300 meters away, and enable Motional’s driverless system to see, understand, and react to dynamic driving environments.

> Motional’s IONIQ 5 robotaxis will then be put through many months of rigorous testing, racking up real world experience and navigating challenging and unpredictable road scenarios. This is conducted across simulation, closed courses, and public roads. The testing is only completed once we’re confident our robotaxis are safer than a human driver.

From Motional’s Voluntary Safety Self Assessment (VSSA), which outlines how we engineer safety into everything we do, to our first-of-its-kind endorsement from TÜV SÜD, a world-leading independent technical service provider, to our constant testing and simulation, we’ve been clear: we’re not taking the shortest or fastest route to driverless. We’re taking the safe route.

The IONIQ 5 will be subjected to the rigorous safety processes Motional is known for. A safer, better future of transportation demands it.

Engineering the Road Ahead

The IONIQ 5 will mark Motional’s fifth platform, and our second to go driverless on public roads. We’ve evolved and advanced with each of these platforms. Our IONIQ 5 benefits from the wisdom gained over decades of innovation, 1.5 million miles in diverse road environments, and hundreds of thousands of hours of testing and assessment.

Motional’s IONIQ 5 robotaxi is born out of strategic partnerships with one of the world’s most experienced automotive manufacturers, Hyundai, and an organization at the forefront of automotive innovation, Aptiv. It will be our most capable platform yet.

More importantly, it will be the one that moves you. In a few short years, this robotaxi will transport real people to real places.

We look forward to sharing more on this platform’s technology and passenger experience in the coming months. 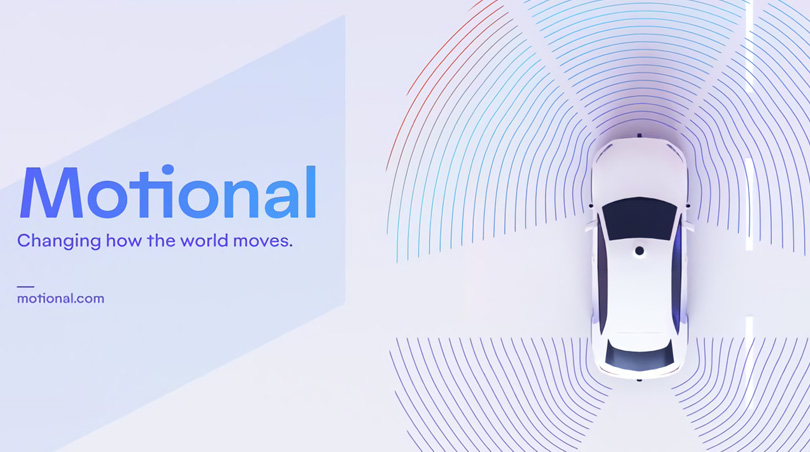 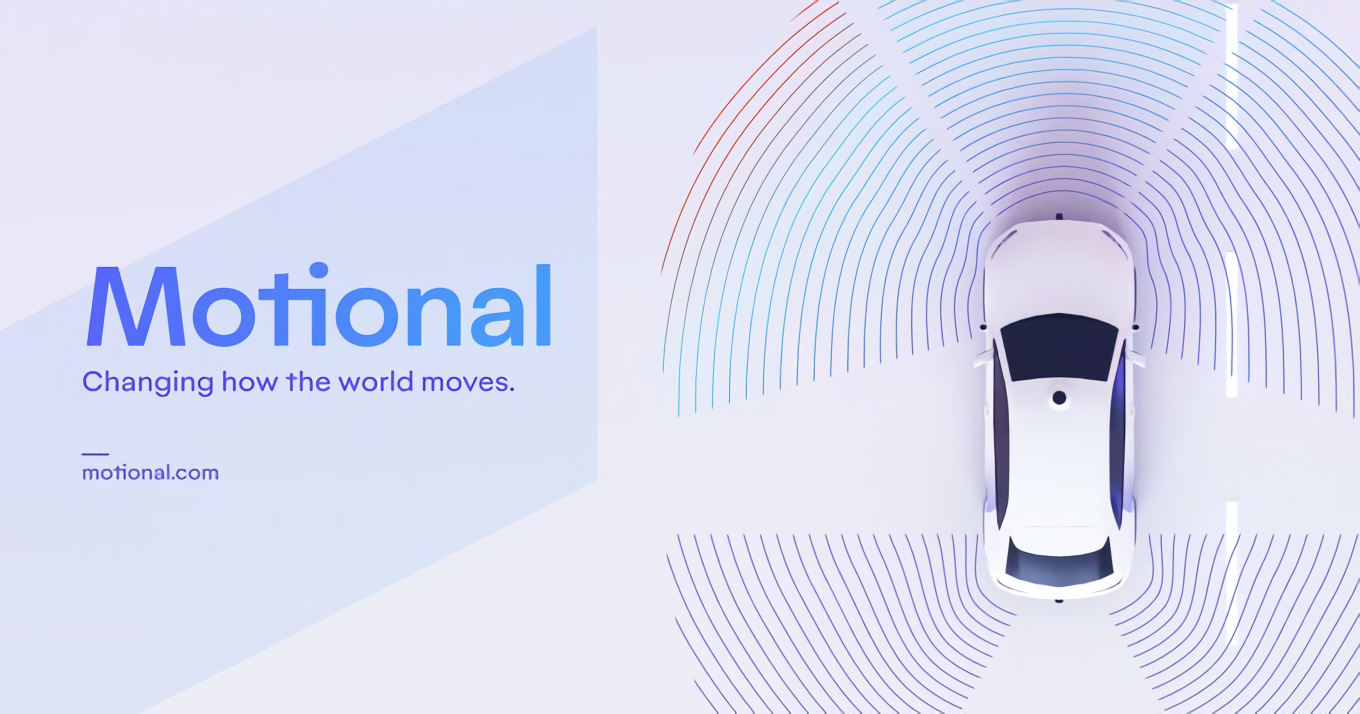 MOTIONAL + DERQ PARTNER TO GIVE DRIVERLESS VEHICLES A BIRD'S-EYE VIEW

Motional’s driverless vehicles process that same environment through a sensor suite of advanced LiDAR, cameras, and radar that see up to 300 meters away, and a full 360 degrees around the vehicle. This superhuman vision enables driverless cars to respond faster and more safely than a human ever could. And they’re already doing so in cities around the world.

But what if we could even further enhance our technology’s already superhuman vision? Would it make it easier to navigate challenging scenarios, such as multi-lane intersections? Could it enable vehicles to respond in ways that create a smoother and more comfortable ride?

We’ve partnered with Derq, an AI company developing innovative road solutions, to find those answers. Together, Derq and Motional are testing how driverless technology reacts when given an even broader perspective than it already has: a bird’s-eye view.

Derq is at the forefront of using AI and vehicle-to-everything (V2X) technology to create safer roads. In the pilot, cameras, placed high up in busy intersections and connected to Derq’s AI systems running on roadside computers, will transmit data to Motional’s vehicles. This data will provide Motional with a different view of some of the toughest intersections they’re navigating. From their elevated vantage point, Derq’s system can see cars exiting parking lots, pedestrians stepping between parked cars, and cyclists weaving through cars stopped at a red light. It can also predict their movements to provide advance notice of potentially challenging interactions with Motional’s vehicles. And this data is available even before a Motional vehicle enters the intersection.

Initially, Motional and Derq will evaluate the different viewpoints (from Motional’s sensor suite and Derq’s cameras) offline. By studying the data offline, we can replay a scene over and over, and examine how the driverless vehicle navigates the scene with and without the extra data from Derq’s cameras.

Later in the pilot, Motional’s vehicles will receive Derq’s bird’s-eye view data in real time to help inform their driving. The vehicles will process that view alongside the data received through the vehicles’ LiDAR, cameras, and radar, to make the safest and smartest driving decisions.

We anticipate that along with helping the vehicles navigate challenging scenarios, the extra viewpoint will also enable them to make smoother decisions, leading to a more enjoyable ride for the passenger. For example, braking more gradually for a traffic obstacle or shifting lanes earlier for an upcoming turn.

In addition to providing real-time bird’s-eye view data to Motional’s vehicles, Derq’s technology can also detect and alert road operators about dangerous traffic incidents unrelated to autonomous vehicles, such as crashes and wrong-way drivers. Derq can in turn build a better understanding of safety hotspots on roads and feed this information back to the AVs and road operators for better routing, design, and planning.

Motional and Derq are launching the pilot at two high traffic intersections in Las Vegas. The intersections were selected for their complexity, which includes:

These intersections also have existing smart infrastructure that was installed to help
Motional and the local governments monitor and manage these challenging roadways. The pilot will launch this spring. We look forward to sharing our findings from the program down the road.

Motional has a long history in Las Vegas, including operation of the world’s longest-standing public robotaxi fleet, and is proud to work with local officials on this industry-leading research.

“The City of Las Vegas strives to build a world-class city through planning, developing, and implementing innovative solutions for our unique challenges. The operation of the Motional driverless vehicles in the Las Vegas area has provided our residents another mode of transportation among the other many multi-modal options available. We look forward to continued innovation as we build a sustainable and resilient community.” - City of Las Vegas Department of Public Works Transportation Engineering Division

Motional and Derq share a common goal to create safer streets through technology innovation. Through this partnership, we’re finding new ways to make driverless vehicles even more advanced, which will lead to wider, faster, and more effective deployments.

When Magna International’s ICON Radar debuts on the Fisker Ocean next year ...

Today, Rimac Automobili announces another major milestone in its history, as it combines forces with the ...

THE VOLVO CONCEPT RECHARGE IS A MANIFESTO FOR VOLVO CARS

For Volvo Cars, electrification is more than simply a shift in powertrains. It represents a new paradigm in car ...

Pininfarina paves the way to the future through a futuristic and daring Virtual ...