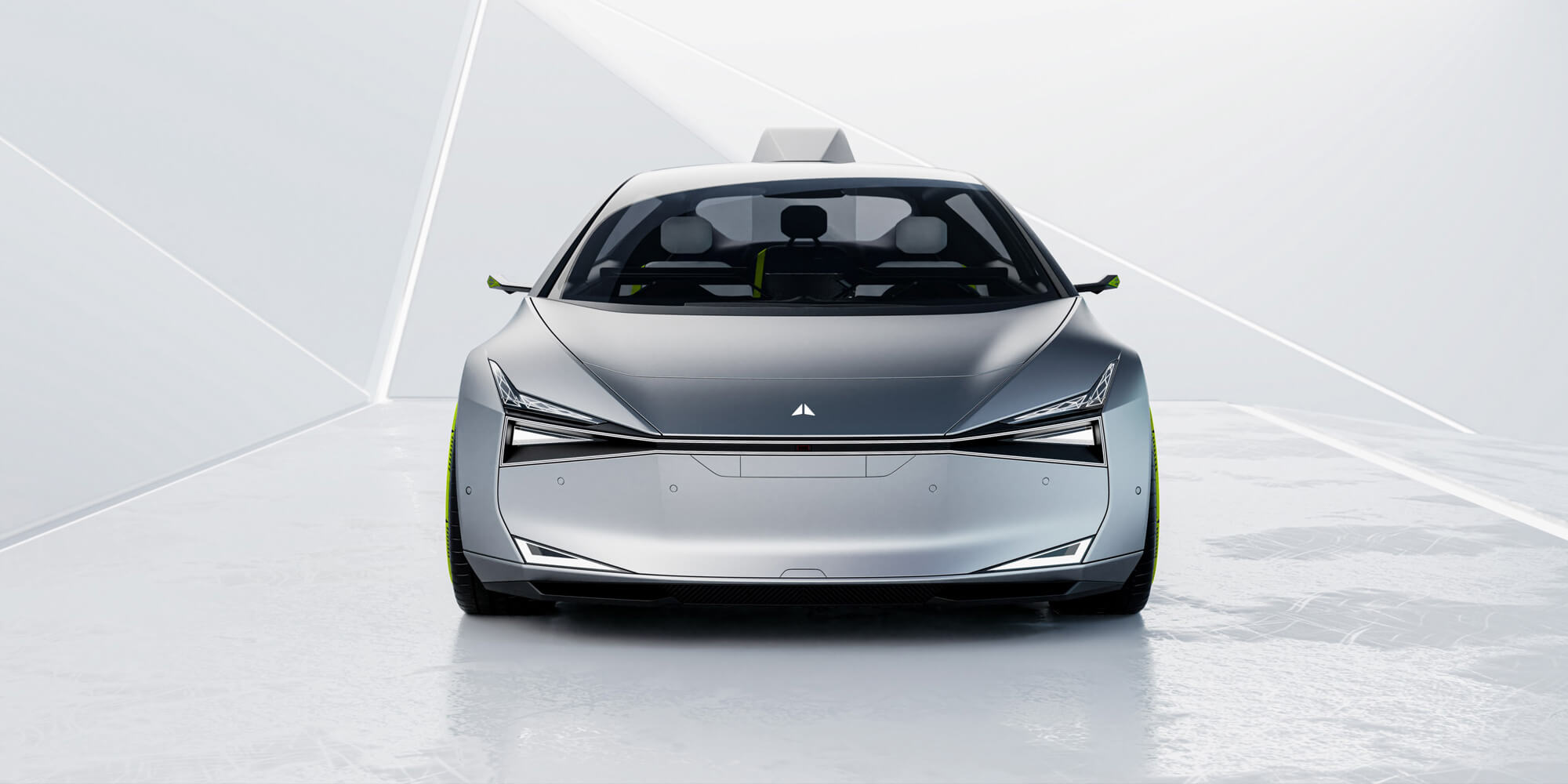 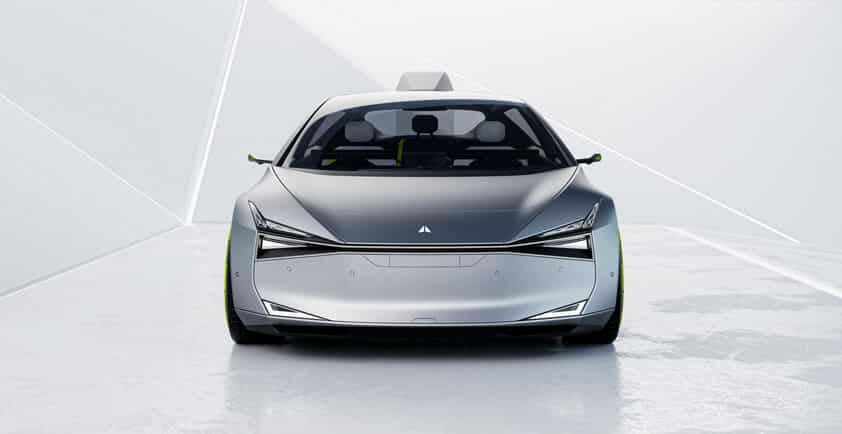 The Holograktor is the first car designed around True AR™ technology and a new ride-hailing business model. The seamless connection of the virtual and real worlds will offer greater safety, comfort, services, and entertainment. The three-seat Holograktor can either be driven conventionally or by remote control.

Currently, WayRay is the only company capable of designing and manufacturing complex Deep Reality Display® technology and rendering the AR content in real-time around the car using a proprietary True AR™ Rendering Engine software.

Backed by early investments from companies like Porsche, Hyundai, and Alibaba, WayRay is using the Holograktor car to emerge from its “Deep Tech” automotive supplier status into the world of new mobility models.

The three-seat Holograktor has been conceived as a ride-hailing car and can either be driven conventionally or by remote control via a 5G and satellite internet connection to a qualified driver.

Its unusual single rear seat “throne” layout was inspired by data showing that more than 80 percent of Uber trips were for one person only.

“The idea is that you can choose Uber Black, Uber SUV, or Uber Holograktor. And if you choose the Holograktor, your ride will be subsidized by sponsored content so that the price will be much lower,” WayRay founder and CEO Vitaly Ponomarev said.

The entire car was also designed to showcase the True AR™ holographic technology from WayRay. Each passenger will have access to several holographic Deep Reality Display® HUDs in front and on the side, with each seat fitted with joysticks for gaming and interacting with the content. 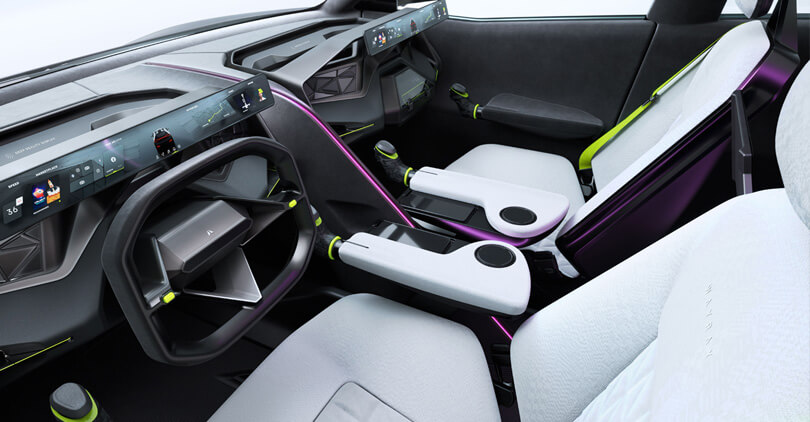 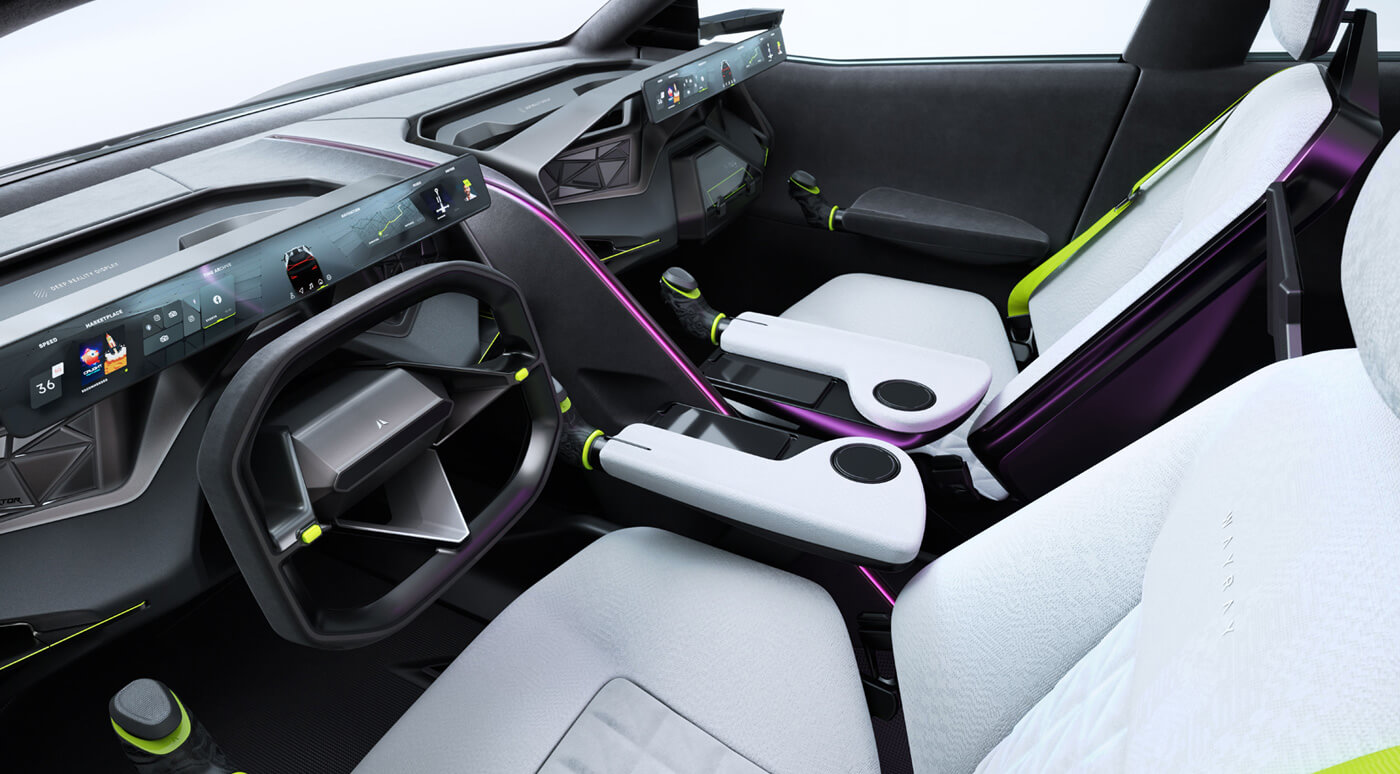 The True AR™ holography was the main driver for the entire design. Every feature and design theme is driven by AR holography.

Holograktor interior has been designed around a novel 2+1 seating arrangement. The front seats are pushed wide apart to provide all three occupants with a clear view of holographic displays engineered around WayRay True AR™ technology.

Another string to the WayRay Holograktor car’s technical suite is its ability to be driven remotely by a qualified driver using the car’s cameras, radar, mapping, and sensor suites, leaving the passengers to relax without relying on immature autonomous-driving systems.

That left the question of what to do with the disengaged steering wheel In the remote mode, which WayRay solved by sliding it forwards and simply fitting it into a groove in the dashboard.

Sasha Selipanov, Head of Design at RAW Design House and chief designer on the Holograktor project, said: “We have seen a few innovative concepts of how steering wheels can fold away out of view, but we didn’t want to come up with something ridiculous just for the sake of it. The reason is simple: ultimately, there will be an airbag there, and the airbag should remain deployable. Safety is first and foremost, and that brings with it a certain sense of realism. We always had a production car as our goal.” 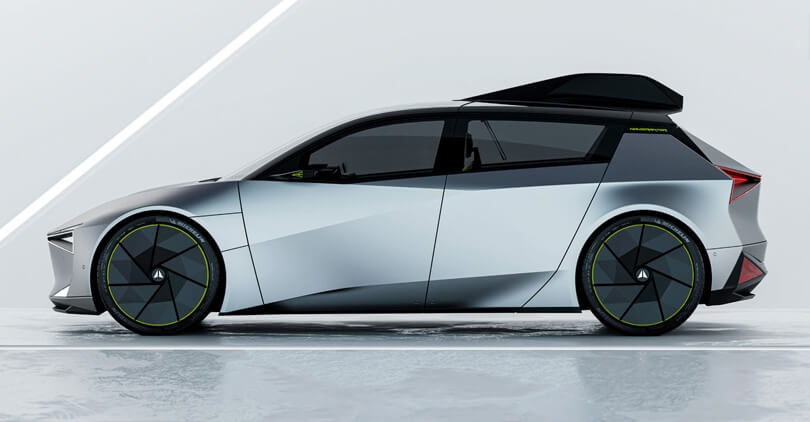 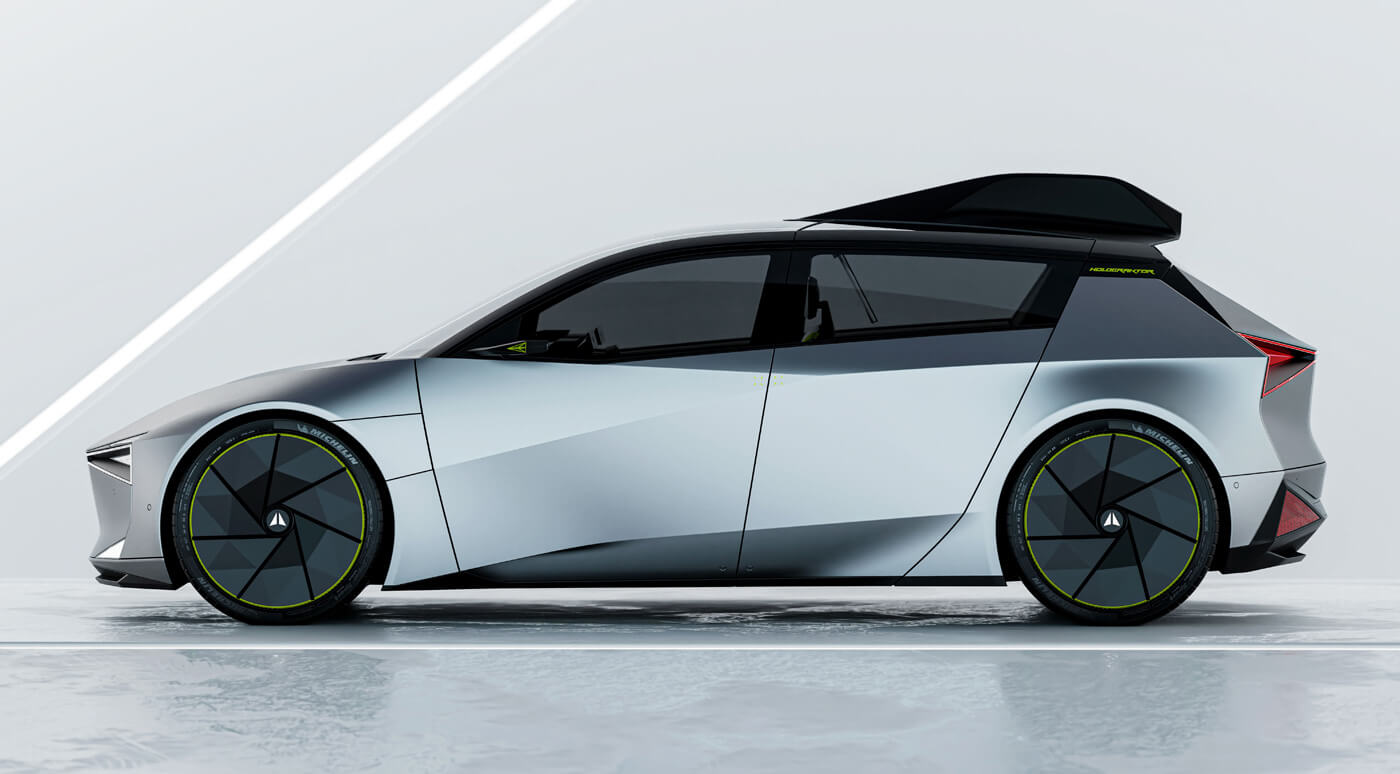 The Holograktor car was designed by renowned hypercar designer Sasha Selipanov, Head of Design at RAW Design House and chief designer on the Holograktor project in collaboration with WayRay’s in-house team of designers.

Sasha Selipanov’s design credits include works on the Lamborghini Huracán, the Genesis Essentia, the Bugatti Chiron, and the Koenigsegg Gemera. The Georgian native, who grew up in Moscow and was trained at the prestigious ArtCenter College of Design in Pasadena before being snapped up by the Volkswagen Group, even came to work on the Holograktor car in an appropriately modern way — via an Instagram message.

Selipanov admitted: “I saw a message from Vitaly on Instagram in my inbox that said ‘Hey! Would you like to catch up and brainstorm about a potential collaboration? Outside of being obsessed with sports cars, I’m a science geek and a bit of a physics nerd, and the fact that his company was playing around with deep-tech ideas and bringing them to customers around the world was hugely exciting. I thought that as far as non-lap-time-setting cars were concerned, this project was probably as exciting as I was ever going to find.”

At the core of the WayRay Holograktor car’s design was the challenge of combining the concept car’s enormous interior space with a well-proportioned exterior, all while staying in line with all current and approaching regulations.

It is a light-ray aesthetic that comes with the triangularity and the prism-like effect, which is just perfectly appropriate for a car built to highlight holography.

Beyond that, the strong triangular shapes and solid stance are nods to the Russian backgrounds of WayRay founder Vitaly Ponomarev and car designer Sasha Selipanov.

Sasha Selipanov commented: “We wanted to create a visual language for WayRay that took Russian constructivism as the base. If you have those early Soviet posters in mind, you can see those brightly colored geometric shapes of triangles and blocks. Coincidentally, the triangular form is reminiscent of a prism, like the Pink Floyd “Dark Side of the Moon” album cover.”

That triangular theme is integrated everywhere, from the 22-inch wheels to the laser headlights and taillights and even to the shrink-wrapped form of the roof Shrimp itself.

While the front doors of the WayRay Holograktor car open conventionally with a slight upward angle, the rear doors contain an integrated B-pillar and open rearwards and upwards, providing the easiest access to all three seats.

Part of the roof is integrated into the rear doors, giving rear-seat passengers an even easier way to step in and out. 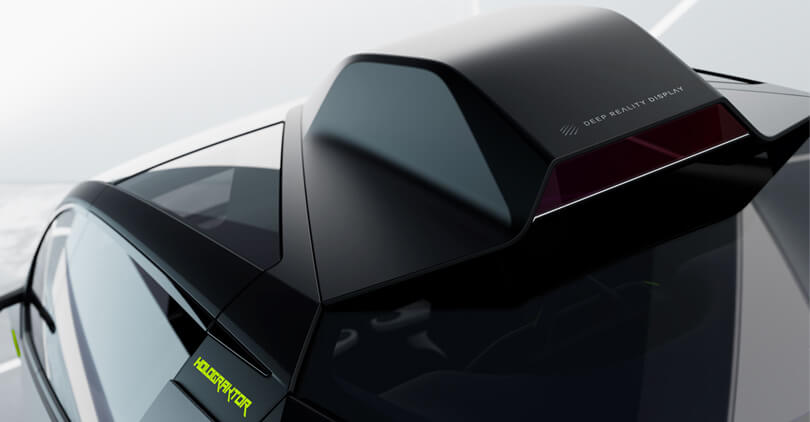 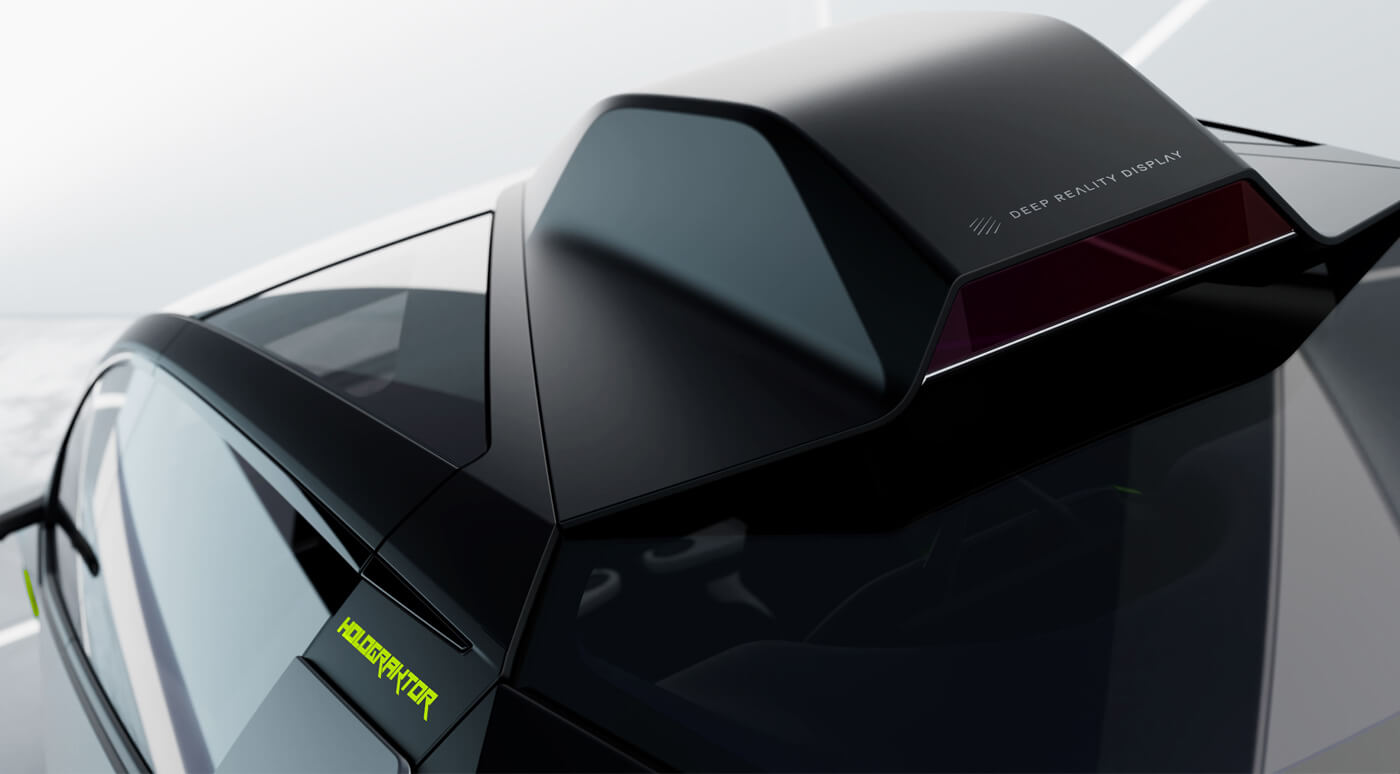 The boxy shape on the roof of the WayRay Holograktor car has been named “The Shrimp.”

It is there proudly for two reasons: to make it clear to anybody who sees the car that the Holograktor is very different from any other car on the road and house the holographic system for the rear passenger.

The Shrimp in its current location is, in fact, inevitable, as packaging and ergonomics constraints have led the design team to place it on the roof. It needs to be there because it contains an enormous amount of high-end technology, and it has the ideal focal length for the rear-seat passenger.

Even with the WayRay holographic system needing less than three liters of volume instead of the 20+ liters required by conventional HUDs, it was decided to prioritize the ride-hailing capability over hiding the technology.

There is no Shrimp for the front passengers, though, as the WayRay True AR® technology sits within the dashboard, aiming up at the windscreen, where the Shrimp’s projections aim down from the roof.

ABB’s new Terra 360 is a modular charger which can simultaneously charge up to four vehicles with dynamic ...

The all-new and all-electric Lotus Eletre is a striking and progressive Hyper-SUV – the first of a new breed of pure ..

Advanced Driver Assist Systems (ADAS) have grown from a premium vehicle feature to a capability ...

Proactive, multi-modal Cerence Co-Pilot goes beyond voice to deliver an ..