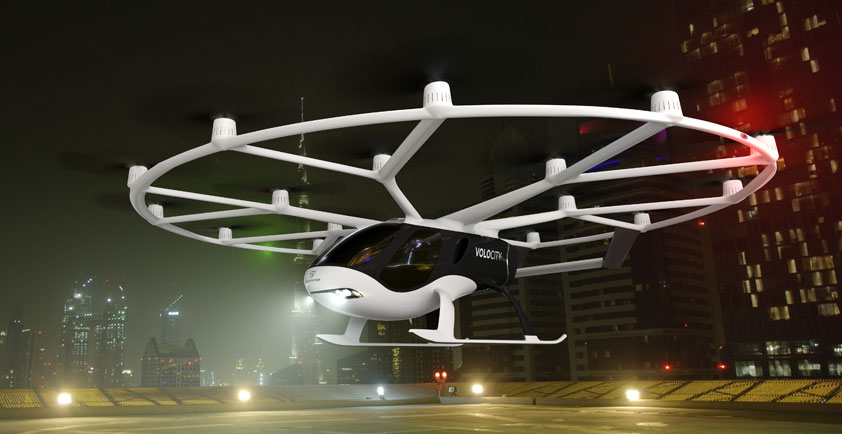 > Designed according to the SC-VTOL category enhanced specifications of EASA

> Incorporates learnings of over 1,000 test flights of previous Volocopter generations

Bruchsal – Today, Volocopter, the pioneer in Urban Air Mobility, presented the design for its newest air taxi model: VoloCity. This will be the fourth-generation electrical take-off and landing aircraft (eVTOL) by the German Urban Air Mobility developer. The VoloCity has been designed to meet the safety standards specified by the European Aviation Safety Agency (SC-VTOL category enhanced) and incorporates user feedback as well as test data from all previous Volocopter generations. With a calculated range of 35 km and airspeed of 110 km/h, the VoloCity is designed to serve as an on-demand inner-city air taxi.

The learnings of over 1,000 test flights on previous Volocopter generations and market research with several hundred potential customers have informed the design and technical specifications of the VoloCity. The result is an aircraft with visible improvements that still stays true to the well-known Volocopter technical and safety features: 18 rotors, redundancy in all critical systems, a low noise signature and a rigid commitment to the inner-city mission. Features include:

> Payload to accommodate 2 people including hand luggage
> Increased flight efficiency through aerodynamically shaped rotor beams, a newly introduced stabilizer to create increased stability in flight and additional lift
> Iconic design with fluid lines is a seamless continuation of architectural language of the future VoloPort all the while combining unprecedented technological achievements and user comfort

“The VoloCity is our most powerful Volocopter yet. It is rigorously designed to meet the demands of Urban Air Mobility and incorporates all requirements of the SC-VTOL certification standard established by EASA in July 2019. It is a result of all insights we have gathered from our extensive testing programmes over the past years.” says Florian Reuter, CEO of Volocopter. “With the VoloCity we will open the first commercial routes and bring Urban Air Mobility to life.”

Volocopter wrote aviation history with the first manned flight of an electrically powered vertical take-off and landing aircraft in 2011. Since then, the German company has developed three generations of aircraft and performed public flights most notably in Dubai in 2017 and during CES in Las Vegas in 2018.

The company is now focusing on establishing the necessary ecosystem around the aircraft to bring on-demand Urban Air Mobility services to life. This entails building up the operational environment such as the physical take-off and landing infrastructure and integrating into air traffic management systems of interested cities. Volocopter is working with global players like Fraport, the operator of Frankfurt International Airport (FRA) to optimize passenger and ground procedures and align regulations with the relevant authorities.

> There is no single „best” eVTOL concept, because mission is paramount when designing electrically powered aircraft. The Volocopter, for instance, is designed for the commercial intra-city urban air mobility mission (UAM) so-called air taxis.

> Air taxis serving the intra-city UAM mission need to cover the most popular high-traffic routes in major cities, offering meaningful time savings and/or allow connections between points that are not well served by current options. The paper shows that a range of 25 to 35 km is viable and a valid starting point to develop the market. The Volocopter with its initial range can offer inner-city taxi as well as airport shuttle services in more than 90% of relevant megacities.

> Noise emissions of aircrafts are a decisive factor for urban air taxi acceptance. The Volocopter has emerged as one of the leading designs as to (low) noise signature, making it suitable to fly into the populated centres of megacities.

> Certification standards for air taxis have been defined by the European Aviation Safety Agency (EASA), and Volocopter supports these high safety standards. Safety and certifiability are strongly connected to simplicity, which is a major driver of the Volocopter design.

> Pricing is a key factor in making air taxis accessible to a large customer base. Keeping operating costs low to build a scalable business will allow for accessible pricing.

Porsche and Boeing signed a Memorandum of Understanding to explore the premium urban air ...