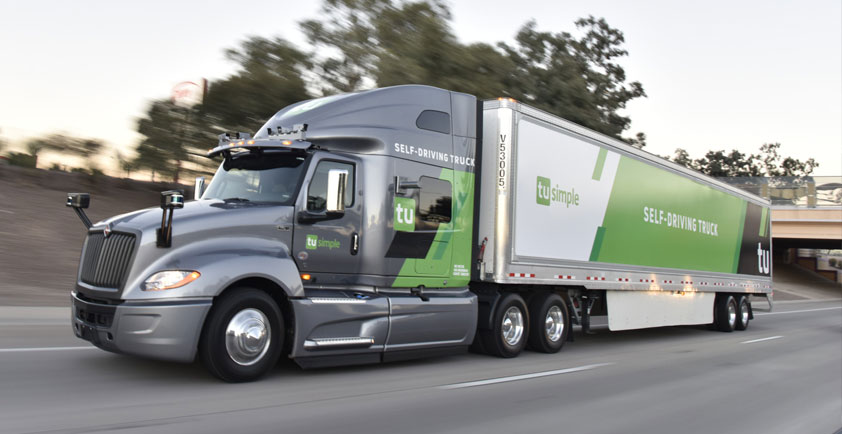 SAN DIEGO -- TuSimple, a global autonomous trucking technology company, announced today the launch of the world's first Autonomous Freight Network (AFN), an ecosystem consisting of autonomous trucks, digital mapped routes, strategically placed terminals, and TuSimple Connect, a proprietary autonomous operations monitoring system. Collectively these components work together to create the safest and most efficient way to bring self-driving trucks to market. Partnering with TuSimple in the launch of the Autonomous Freight Network are UPS, Penske Truck Leasing, U.S. Xpress, who operates one of the largest carrier fleets in the country, and McLane, a Berkshire Hathaway company and one of the largest supply chain services leaders in the United States.

"Our ultimate goal is to have a nationwide transportation network consisting of mapped routes connecting hundreds of terminals to enable efficient, low-cost long-haul autonomous freight operations," said Cheng Lu, President, TuSimple. "By launching the AFN with our strategic partners, we will be able to quickly scale operations and expand autonomous shipping lanes to provide users access to autonomous capacity anywhere and 24/7 on-demand."

The Autonomous Freight Network will roll-out in three phrases, and lays the groundwork for self-driving autonomous trucks to become commercially available by 2024:

> Phase I (2020-21) will offer service between the cities of Phoenix, Tucson, El Paso, Dallas, Houston, and San Antonio.

> Phase II (2022-23) will expand AFN service from Los Angeles to Jacksonville and connect the east coast with the west.

> Phase III (2023-24) will expand driverless operations nationwide adding major shipping routes throughout the lower 48 states allowing customers to utilize their own TuSimple equipped autonomous trucks on the AFN by 2024.

The company will replicate the strategy in Europe and Asia after the AFN rolls out nationwide.

U.S. Xpress with a fleet size of 7,000 operating across the country, will provide additional lanes to aid TuSimple's L4 technology learning. With access to more lanes, TuSimple can advance its understanding of and refine its responses on the road, making it safer for professional truck drivers and those they share the highways with.

"For the past two years, U.S. Xpress has worked closely with TuSimple to help define carriers' needs for L4 trucks," said Eric Fuller, President and Chief Executive Officer, U.S. Xpress. "We are interested in understanding how TuSimple technology can make our fleet safer and more fuel efficient as well as how it can improve the overall delivery experience for our professional drivers and customers."

TuSimple already operates autonomously on seven different routes between Phoenix, Tucson, El Paso, and Dallas. This fall, TuSimple will open a new shipping terminal in Dallas, allowing the self-driving truck company to service customers in the coveted "Texas triangle." The terminals are designed to give mid-sized customers access to the advantages of autonomous trucking. For high-volume customers, TuSimple will continue to map routes and deliver directly to their distribution centers.

"Penske has always been committed to supporting its customers and innovation when it comes to mobility," said Bill Combs, Vice President Connected Vehicle Strategy and Experimentation, Penske. "We look forward to our continued collaboration with TuSimple and supporting their fleet needs as this new freight network begins to scale."

TuSimple is a self-driving technology company headquartered in San Diego, California with facilities in Tucson, Shanghai, and Beijing. TuSimple is developing a commercial-ready Level 4 (SAE) autonomous driving solution specifically designed to meet the demands of long-haul heavy-duty trucks and aims to transform the $800 billion U.S. trucking industry. The company was founded in 2015 with a mission to improve the safety and efficiency of the trucking industry and reached unicorn status in 2019.

CANOO'S NEW PICKUP IS ALL ELECTRIC, ALL AMERICAN – READY FOR WORK & THE WEEKEND

AEye Sets New Standards for LiDAR Range, Resolution and Speed - Powering the Next Generation of Automotive and Trucking Highway ADAS..

The Finnish self-driving software company Sensible 4 has been expanding its operations to Norway, one ..