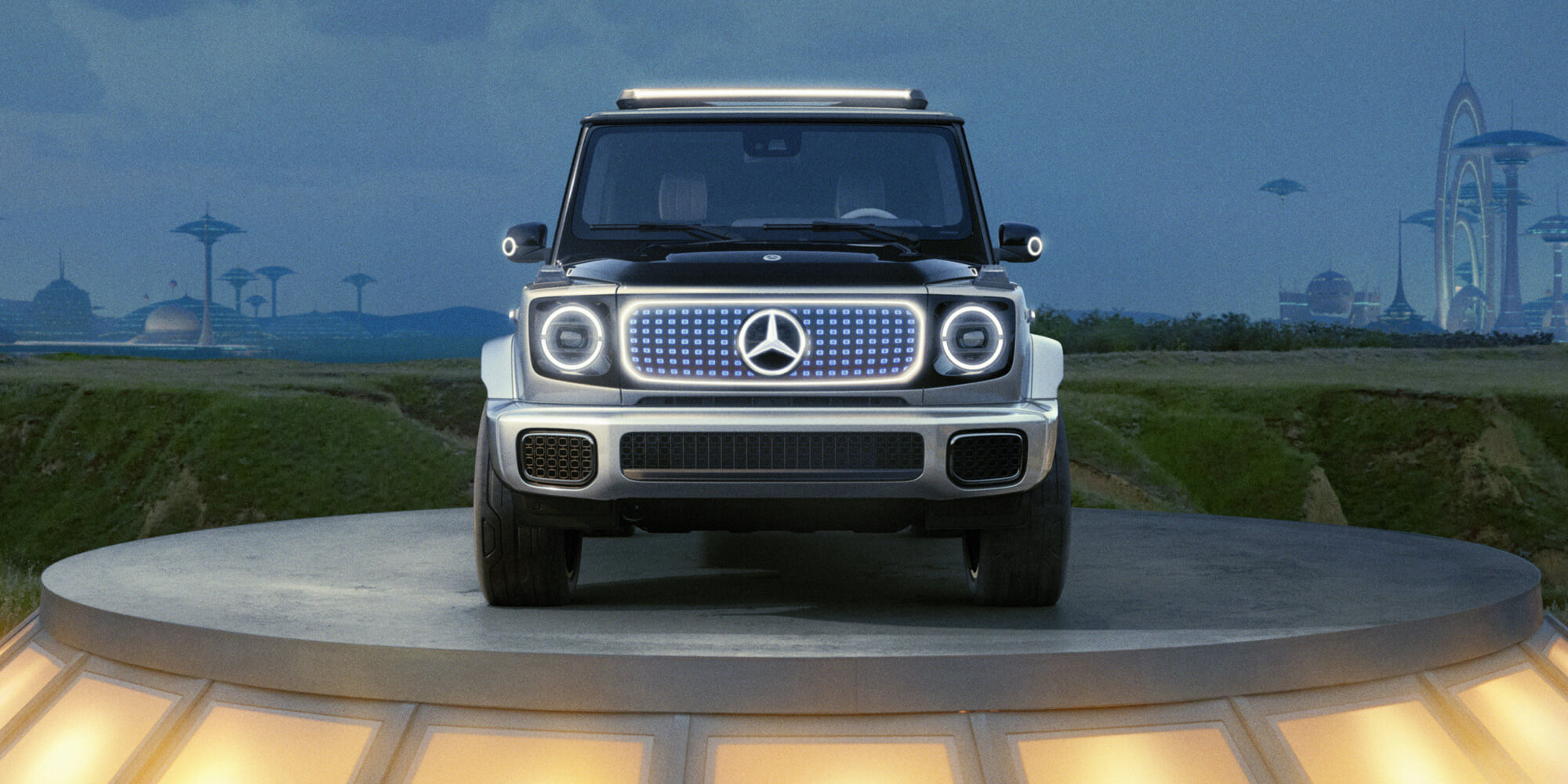 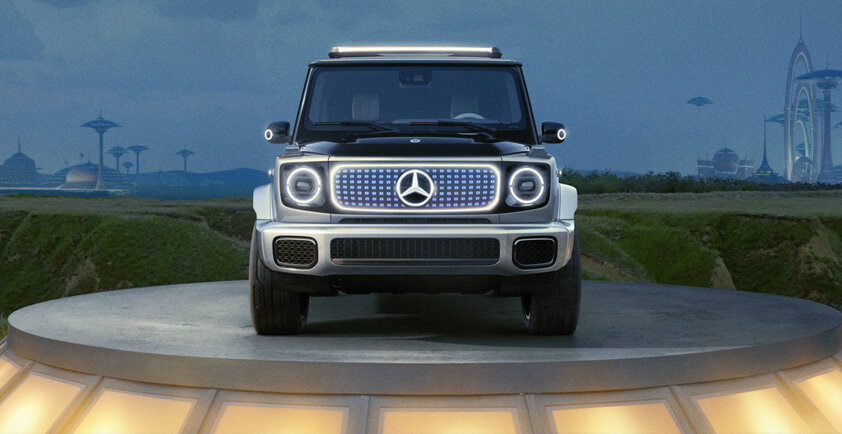 Stronger than time: Mercedes-Benz G-Class ready for the age of e-mobility: The Concept EQG provides an exciting preview of the all-electric version of the legendary all-terrain model series.

With the Concept EQG, Mercedes-Benz presents the near-production study of an all-electric model variant of its utilitarian off-road icon. Visually, the concept car combines the unmistakably striking look of the G-Class with selected design elements typical of all-electric models from Mercedes as contrasting highlights. The 4x4 qualities of the "G", which have always set the highest standard, will not only find their way into the age of electric mobility, but will be developed even further in some areas. The Concept EQG thus offers a promising preview of what a Mercedes-Benz G-Class with battery-electric drive will be capable of.

At the world premiere of the current model generation of the Mercedes-Benz G-Class in Detroit in January 2018, Hollywood great Arnold Schwarzenegger, star guest and ardent "G" fan, elicited a promise from the then Chairman of the Board of Management of Daimler AG, Dieter Zetsche, that was unexpected for many at the time: The upcoming electrification of all model series would of course also include the G-Class. Just under three and a half years later, Mercedes-Benz is making good on this promise and presenting the Concept EQG, a near-production study of an all-electric G-Class. "Wherever market conditions permit, Mercedes-Benz will be ready to go fully electric by the end of the decade," emphasises Markus Schäfer, Member of the Board of Management of Daimler AG and COO of Mercedes-Benz Cars. "With this strategic step from 'Electric first' to 'Electric only', including sustainable production and the CO2-neutral life cycle of our batteries, we are accelerating the transformation to a zero-emission and software-driven future. We want to inspire our customers to switch to electric mobility with convincing products. An icon like the G-Class fulfils this task perfectly."

The origins of the successful G-Class model date back to 1979. For more than four decades, the "G" has thus embodied the luxury off-road vehicle from Mercedes-Benz. The exterior appearance of the Mercedes-Benz off-road legend has changed only marginally over the entire period. Even as part of the extensive redesign in 2018, which brought with it the biggest technological leap in the model's history, Mercedes-Benz only cautiously developed the unmistakably striking design further. For good reason: because its once purely functional components have long since become iconic style elements. These include, for example, the distinctive door handle and characteristic closing sound, the robust exterior protection strip, the exposed spare wheel on the rear door and the eye-catching front turn indicators.

The Concept EQG is also very much in the design tradition of the model series and can be recognised at first glance as a G-Class. The near-production study adopts the G-Class' angular silhouette including its iconic elements. Illuminated stripes make the robust exterior protective strips stand out visually. The separating edge of the attractive two-tone paint finish – gloss black on top, gloss aluminium beam on the bottom – runs in the area of the front end directly under the overlying bonnet, thus emphasising this design feature even more clearly.

The front view of the Concept EQG looks familiar, not least because of the typical round headlights. Instead of a radiator grille, as on the conventionally powered model versions, this all-electric variant features a continuous deep black radiator grille. In this Black Panel Grille, the illuminated star with 3D effect sets a striking accent. Around it, the animated pattern of "round squares" (squircle pattern) in the familiar blue of the Mercedes-EQ models creates a visual link. An all-round illuminated band wraps the Black Panel, which, alongside the white illuminated circles in the exterior mirror housings, complements the daytime running light graphic of the headlights. 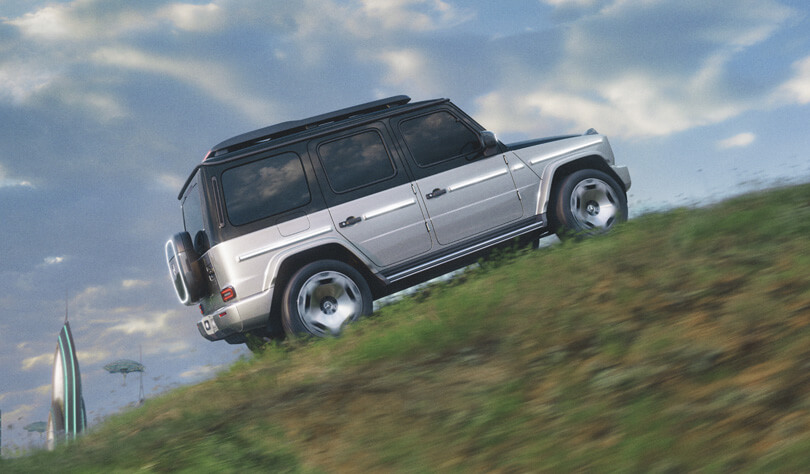 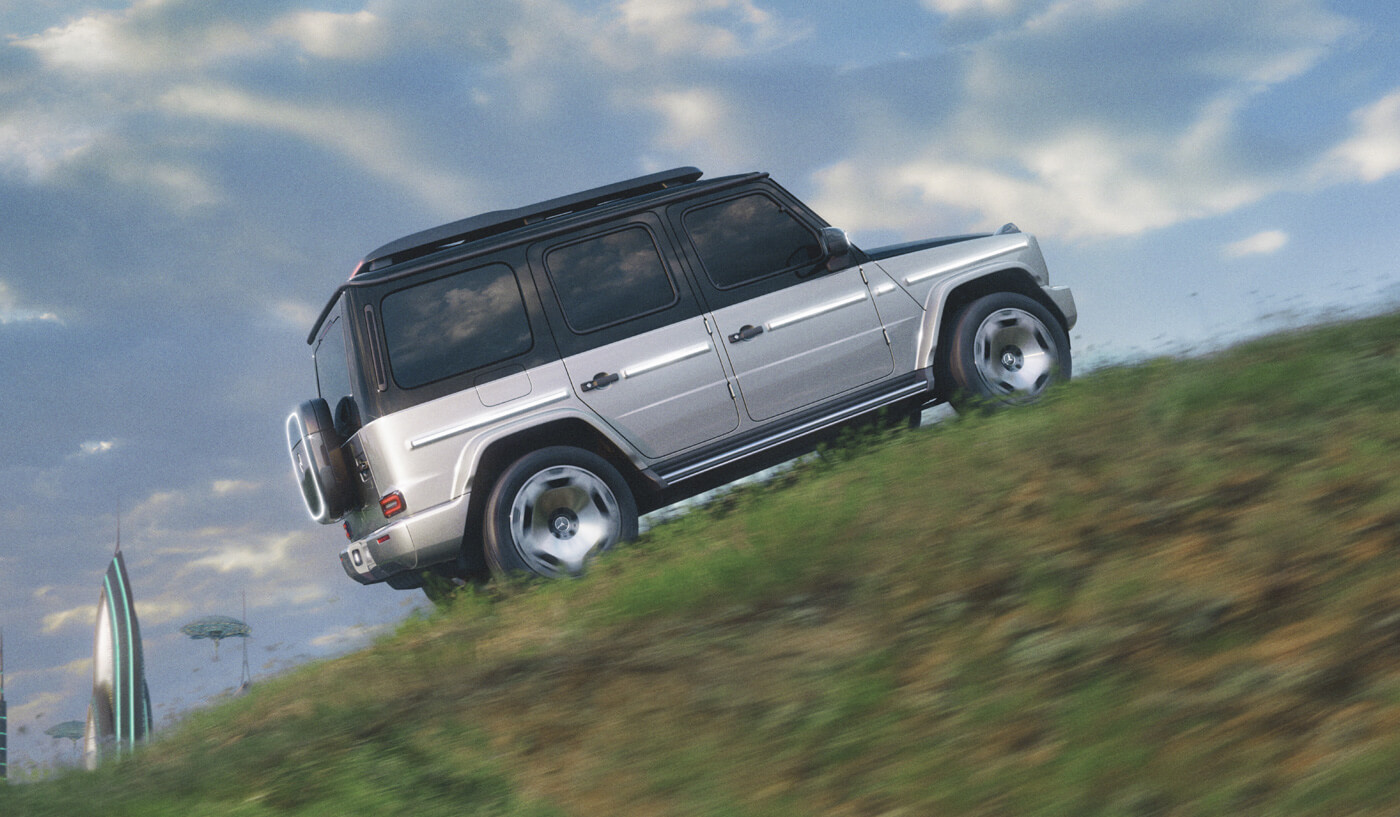 The Concept EQG rides on 22-inch polished aluminium alloy wheels in an exclusive design. Instead of the usual spare wheel cover, there is a lockable box with white illuminated accents on the rear door, whose design is reminiscent of a wallbox. This could be used, for example, to store the charging cable within easy reach. "We're travelling into the future with the new EQG! This car epitomises the fusion of state-of-the-art off-road capabilities with the dawn of electric mobility that we all need to strive for. It stands for our relentless pursuit of the utmost desire and luxury. For us, the most important thing was to keep the full G-Class DNA but beam it into the EQ age: Like the G-Class but different. Modern accents like the white LED technology and a wallbox on the rear of the vehicle illustrate the difference." says Gorden Wagener, Chief Design Officer Daimler Group.

Another highlight of the exterior design is the flat roof rack in high-gloss black. The central element of its minimalist design is the centrally shaped "G", which is unmistakable in the top view. The white LED strip integrated into the front edge of the roof rack is a modern interpretation of the searchlight indispensable for demanding off-road adventures – and thus underlines the seriousness of the Concept EQG in this area: not despite of, but precisely because of its all-electric drive. Another LED strip in red finish forms the rear end of the roof rack.

"We are proud of the more than 400,000 'G's we have produced to date," emphasises Dr Emmerich Schiller, Managing Director of Mercedes-Benz G GmbH and Head of the Off-Road Vehicle Product Division at Mercedes-Benz AG. "In its more than 40-year model history, the G-Class has always used the most modern and suitable drive technology at the time – from the pre-chamber naturally aspirated diesel of the early days to the AMG 4.0-litre V8 in the current top model, the G 63. Against the background of our 'Electric only' strategy, the electrification of this off-road legend is simply the logical next step – and an absolutely fascinating project. Our icon is and remains 'stronger than time' in every respect."

An uncompromising off-roader – precisely because of the electric drive system

The Concept EQG is clearly a "G" not only in terms of design, but also because of its inner values, making it an uncompromising off-roader. Its body is also based on the robust ladder frame. The chassis design remains extremely off-road capable, as is typical of the G-Class: with independent suspension on the front axle and a rigid axle at the rear, newly developed for the integration of the electric drive. With four electric motors close to the wheels and individually controllable, the vehicle will offer unique driving characteristics both on- and off-road. As with any real 4x4, the Concept EQG's off-road reduction can be activated via a shiftable 2-speed gearbox in order to meet the high "G"-specific off-road requirements with confidence.

Equipped in this way, the fully electrically powered version of the G-Class will of course face the legendary test track on the 1445-metre high Schöckl mountain in Graz at the end of its development into a series model. Peppered with gradients of up to 60 degrees, the 5.6-kilometre route has always been regarded in the international off-road scene as one of the world's greatest challenges for man and technology. After successfully conquering it, the electric "G" will also be able to adorn itself with the "Schöckl proved" quality certificate that is obligatory for the 463 series. And like its conventionally-driven brothers, it will also shine with a climbing capacity of up to 100 per cent on suitable ground.

The design advantages of the electric drive also play into its favour, making it ideally suited for off-road vehicles and ambitious off-road operations. The batteries integrated into the ladder frame ensure a low centre of gravity. Since the electric motors provide their maximum torque practically with the first revolution, an all-electric off-road vehicle like the Concept EQG and the later production model boast enormous pulling power and controllability – which also proves to be an advantage on steep slopes and deep terrain. 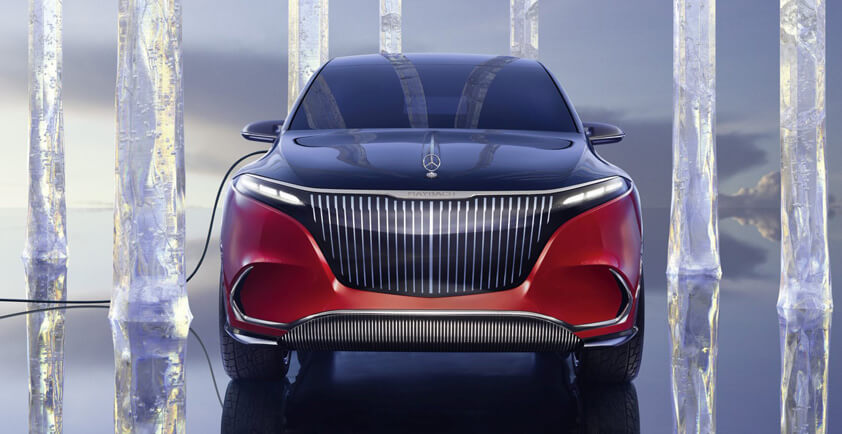 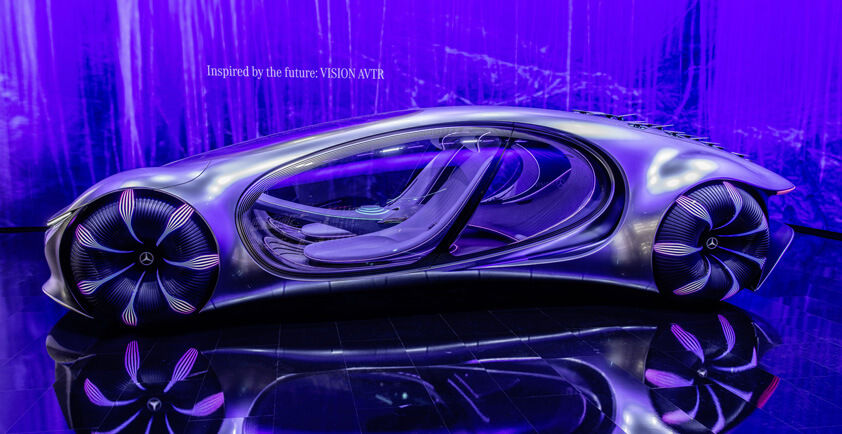 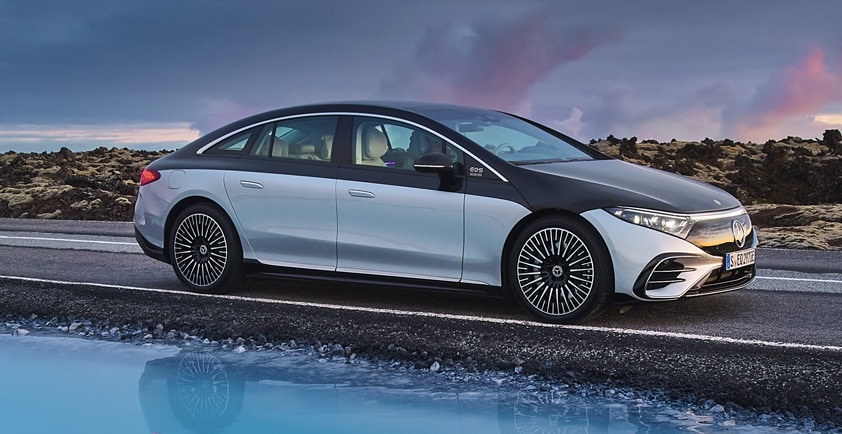 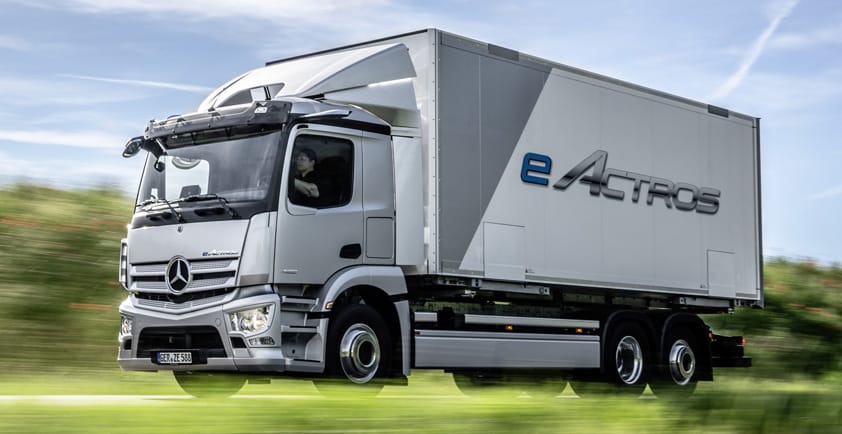 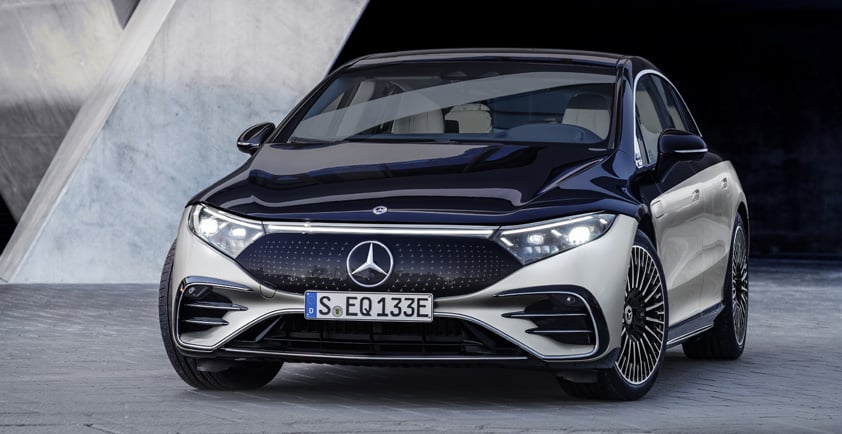 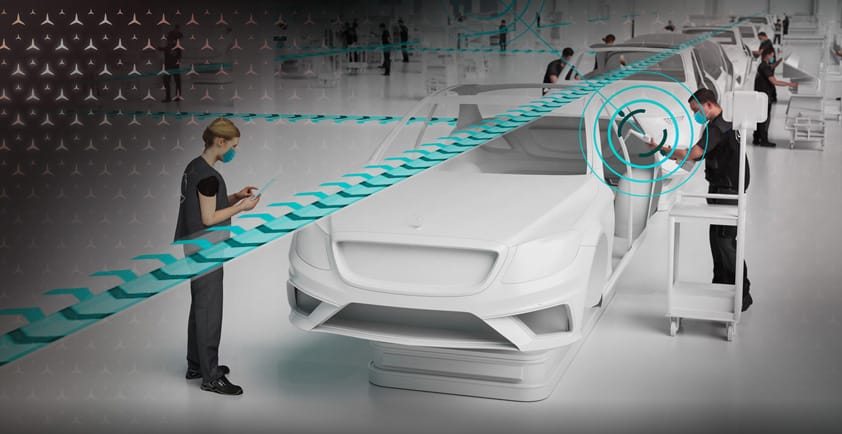 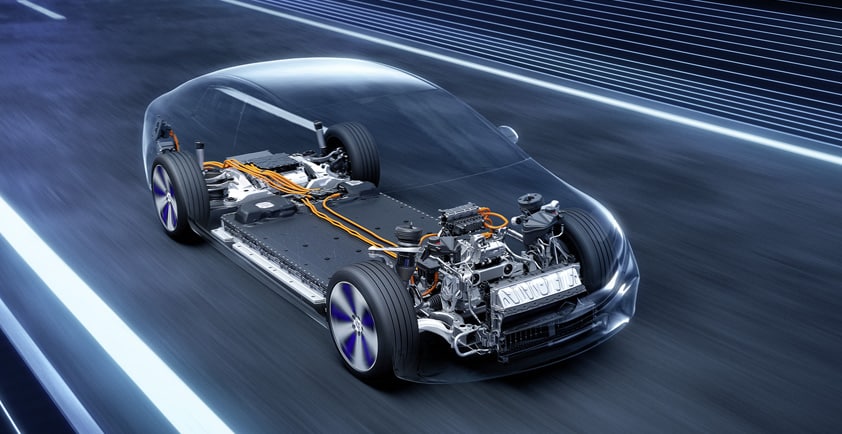 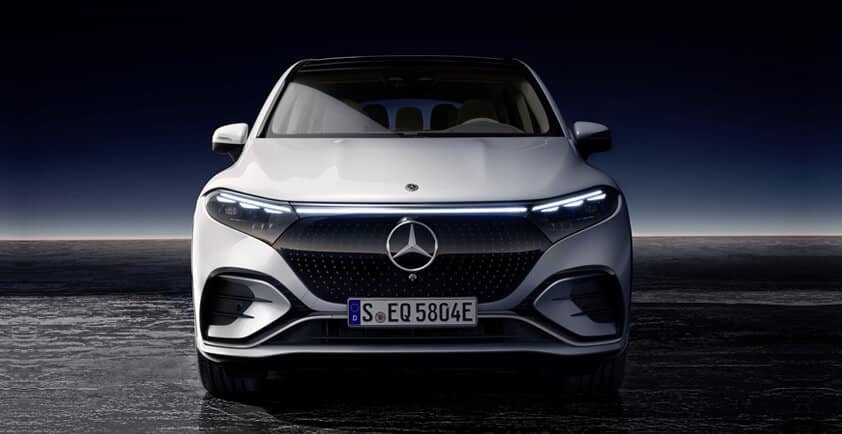 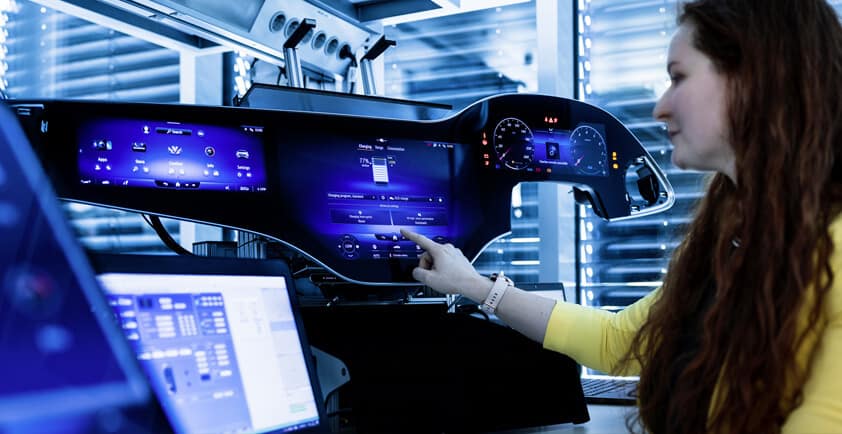 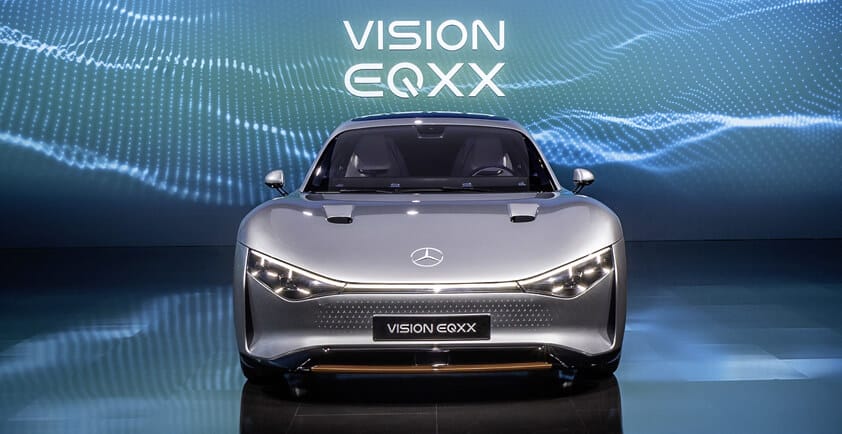 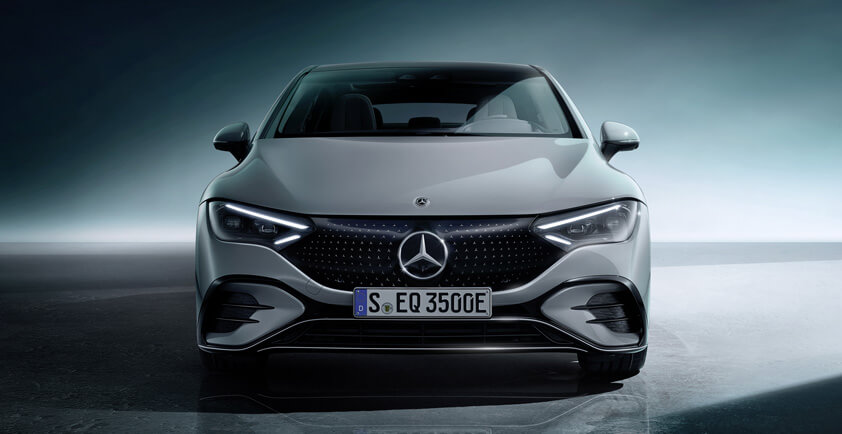