GOTHENBURG, SWEDEN. Polestar, the pure play electric performance car brand, has revealed a new concept car that redefines sports roadsters for the electric age. Named Polestar O2, the hard-top convertible is Polestar’s vision of open-top performance and a thrilling driving experience – with all the benefits of electric mobility.

“Polestar O2 is the hero car for our brand,” comments Thomas Ingenlath, Polestar CEO. “It opens the door to our secret chamber of future potential. This is a taste of what we can design and engineer with the talent and technology we have in-house. It looks incredible, and being able to lower the roof and not hear an engine promises a superb sensation.” 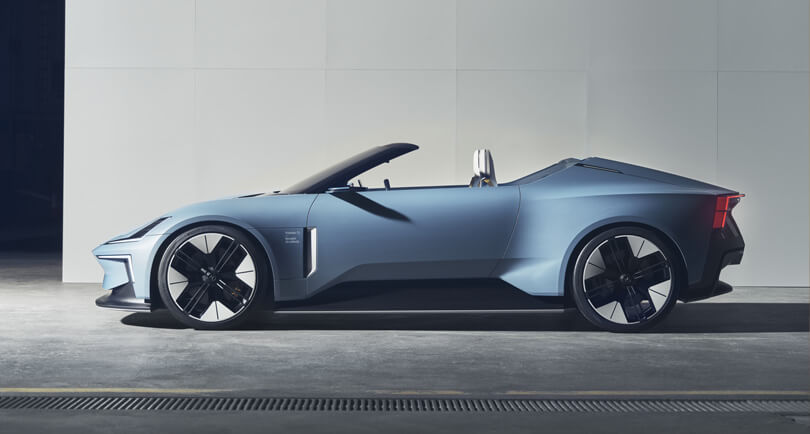 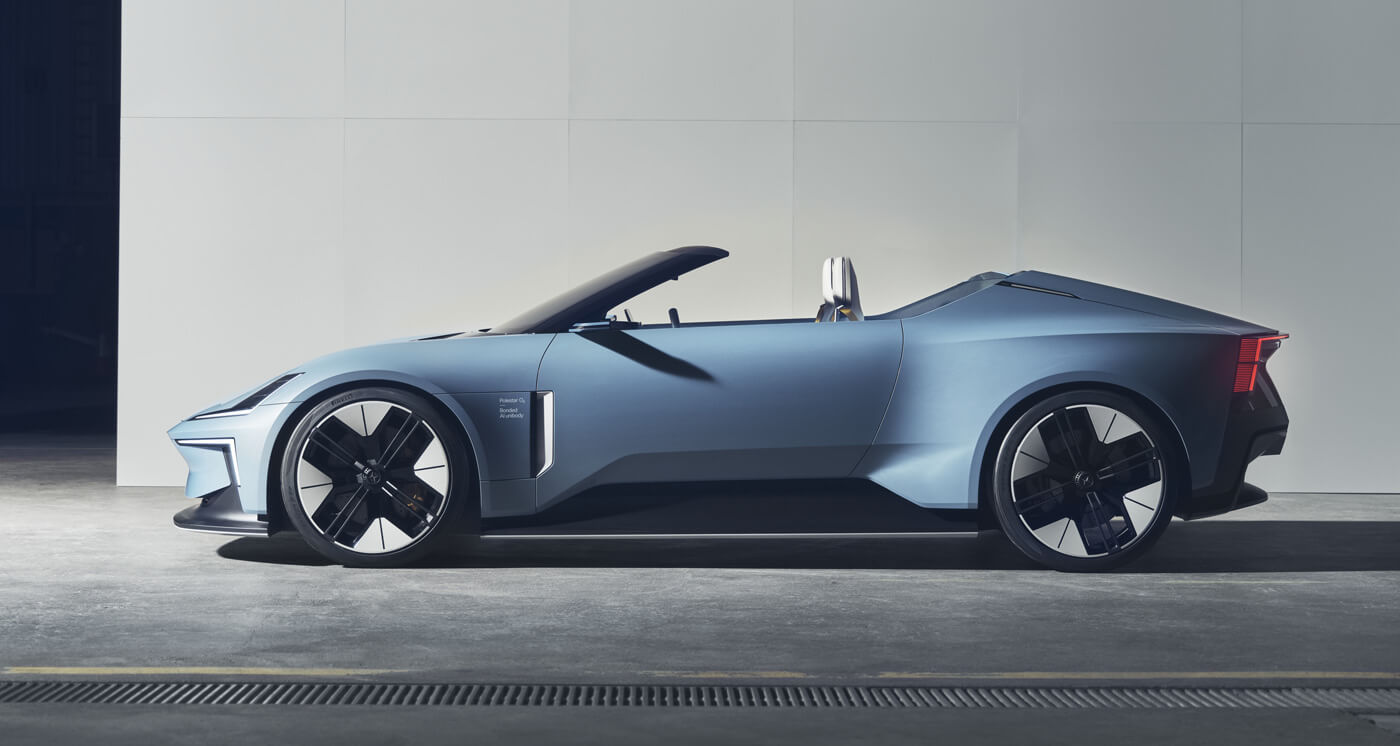 Maximilian Missoni, Polestar’s Head of Design, says: “Polestar O2 is our vision of a new era for sports cars. By mixing the joy of open top driving with the purity of electric mobility, it unlocks a new mix of emotions in a car. But as with all our cars, we are about more than just straight line sprints. It’s when you turn the steering wheel that the true fun begins.”

The driving experience in the Polestar O2 is designed to be lively, light and full of confidence. Predictability and playfulness are core to exciting, spirited driving. Tight body control, high rigidity and intuitive dynamics are inherent benefits of the bespoke bonded aluminium platform which is adapted from the Polestar 5, developed in-house by Polestar’s R&D team in the UK.

The high quality and rigidity of the bonded aluminium platform are geared towards heightened dynamic response. Handling dynamics are taut thanks also to small roll angles and high roll damping, and the agile, direct steering feel is linear, with great steering torque build-up. 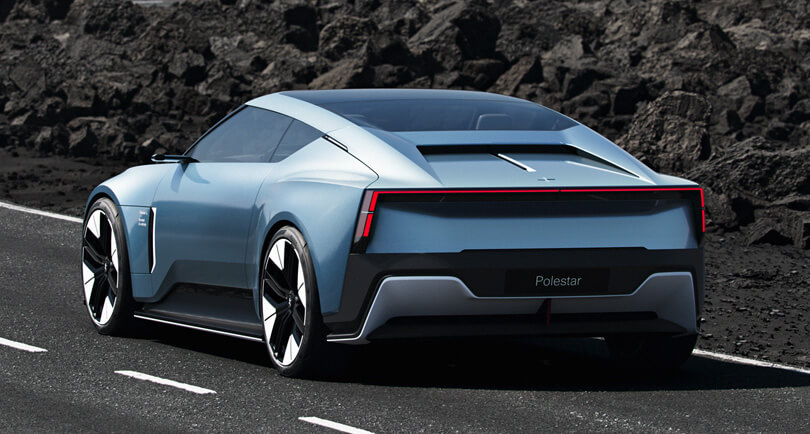 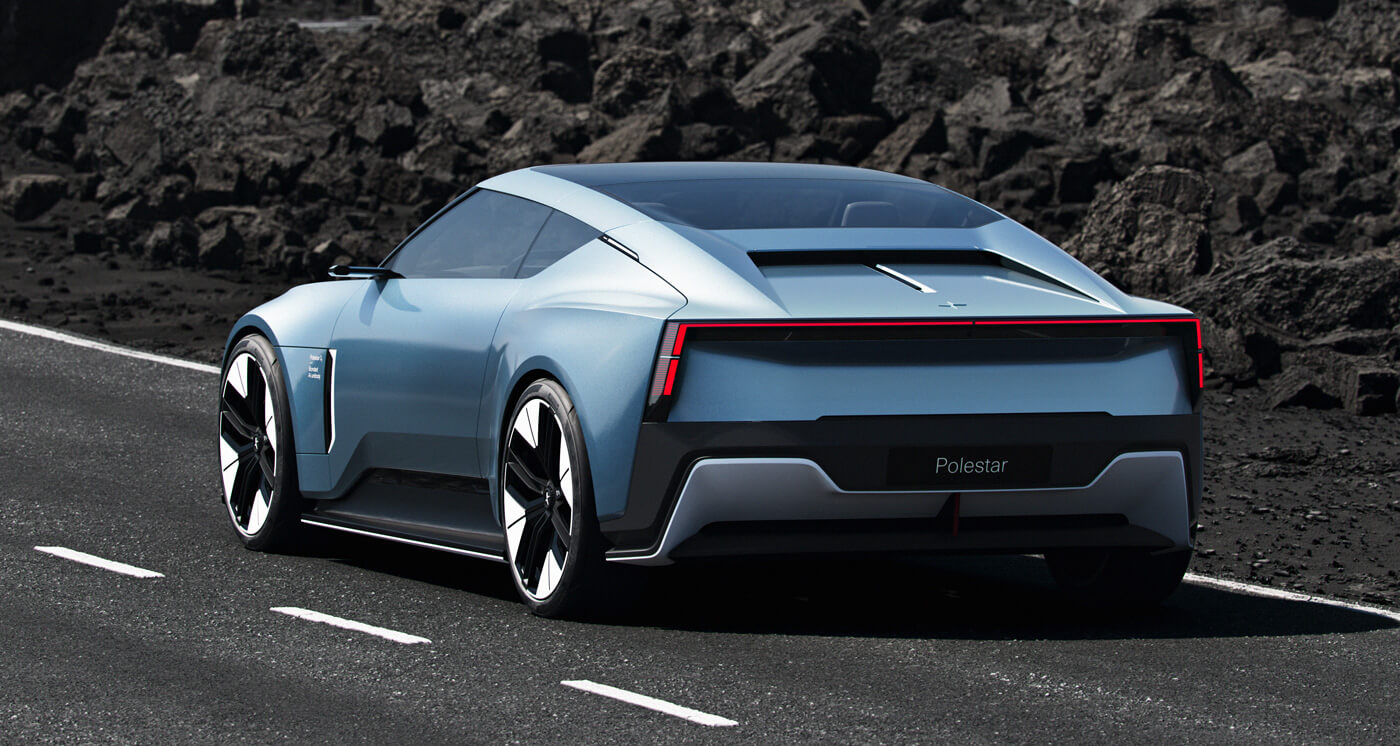 Clearly related to the Polestar Precept concept car but with its own distinct character, the look of Polestar O2 shows how Polestar’s evolving design language can be adapted to different body styles with a strong family resemblance. The low and wide body with an assertive stance, compact 2+2 cabin design, minimal overhangs and a long wheelbase, embody classic sports car proportions but with a clearly modern, electric feel.

“This car is a meeting point between technology and art, between precision and sculpture, with a determined but not aggressive stance,” continues Maximilian Missoni.

Aerodynamics are manipulated to maximise range thanks to disguised design features like integrated ducts that improve laminar air flow over the wheels and body sides, and the rear lights that function as air blades to reduce turbulence behind the car. 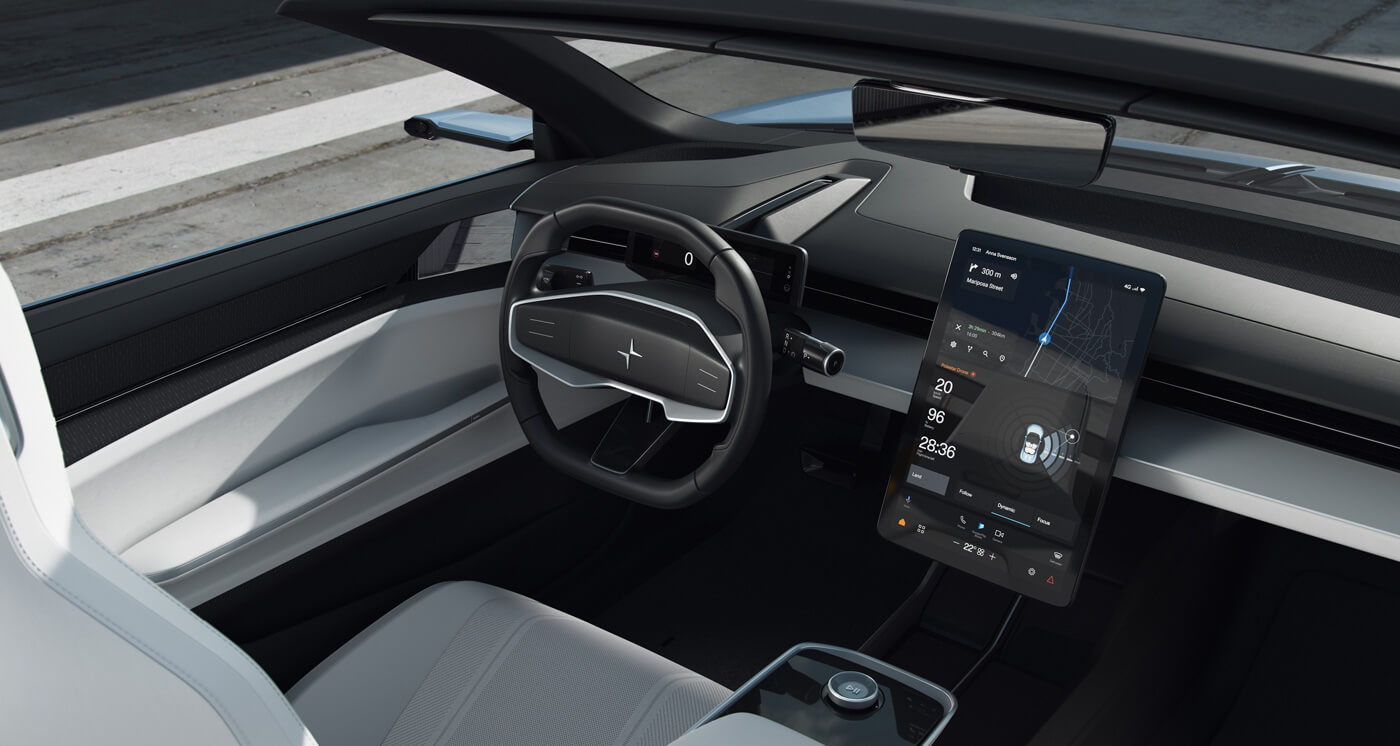 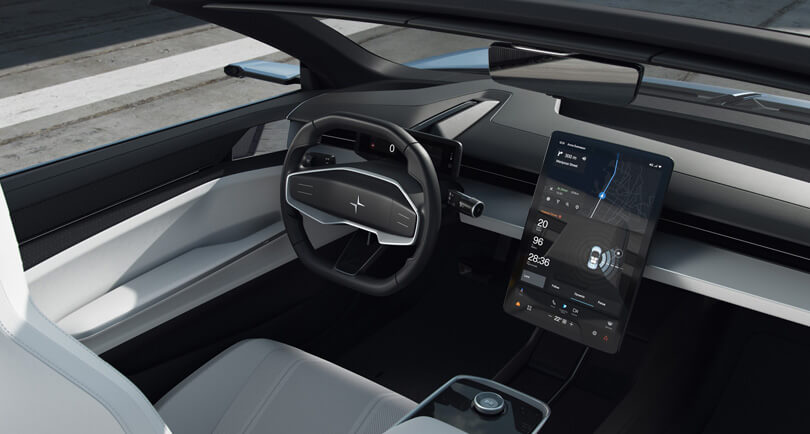 Polestar O2 also showcases advances in sustainability and technology. A new thermoplastic mono-material features extensively in the interior. The term “mono-material” describes the use of a single base material to
manufacture different components.

In Polestar O2, recycled polyester is the sole material used for all the soft components of the interior: foam, adhesive, 3D knit fibres and non-woven lamination. This simplifies recycling and is a significant step towards greater circularity, while also reducing weight and waste.

Polestar sustainability teams believe that materials should be recycled, not downcycled. In Polestar O2, they have integrated a new method of controlling recycled content and improving circularity of metal components. Different grades of aluminium are used throughout the chassis to help deliver a thrilling driving experience.

These different grades are labelled, allowing them to be recycled more effectively and for their properties to be retained. High grade aluminium remains high grade, while other grades maintain their varied characteristics, allowing for greater material efficiency and a lower requirement for virgin aluminium. 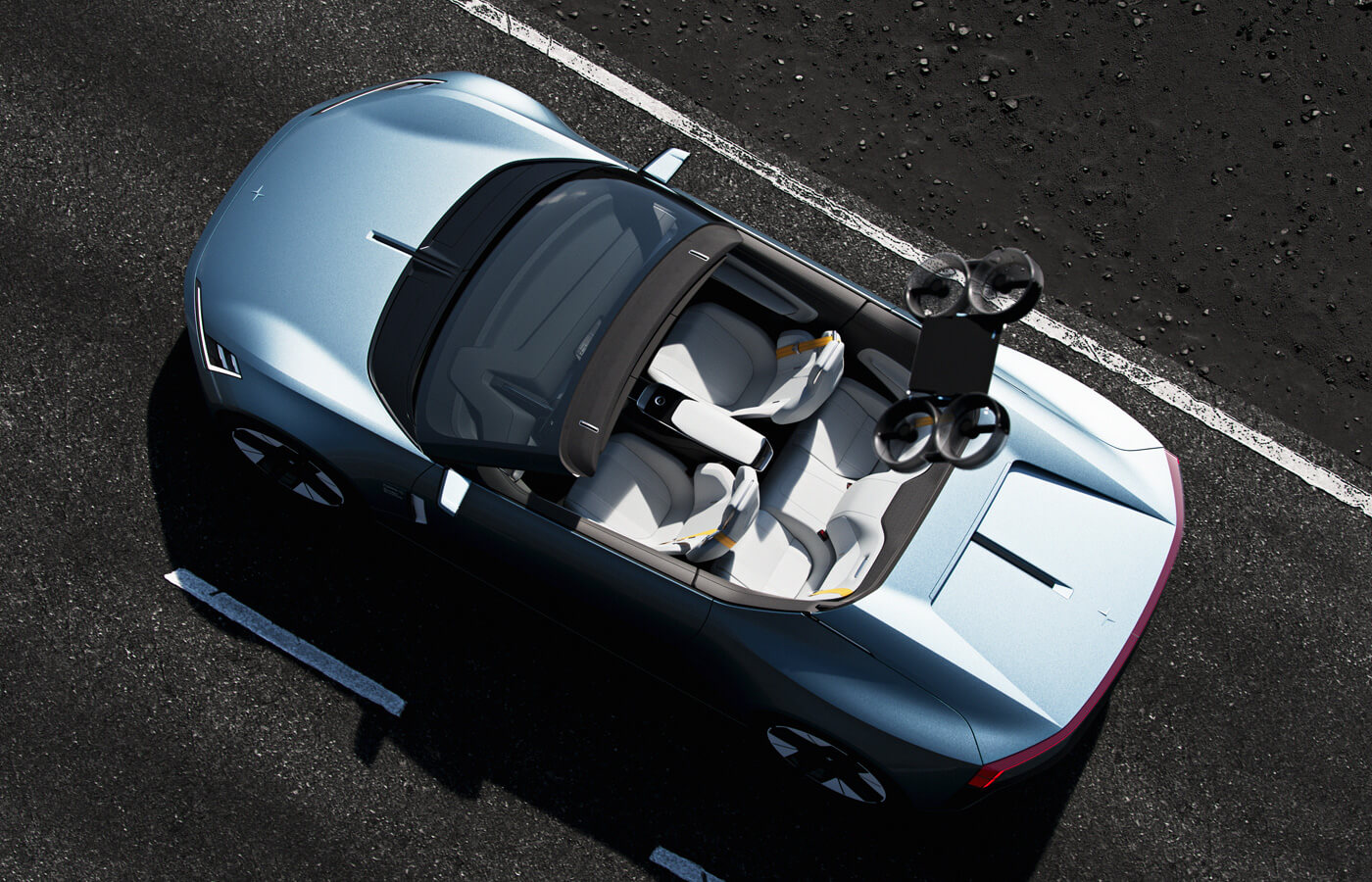 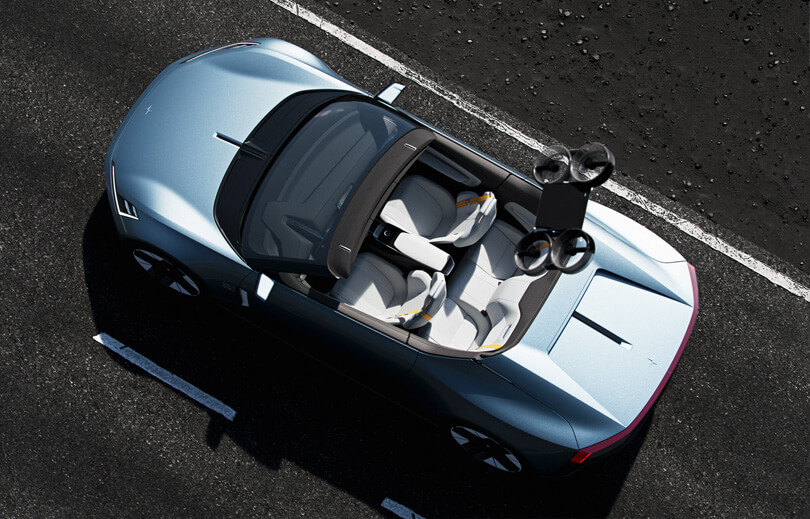 In a world increasingly driven by social media, the Polestar O2 features an autonomous cinematic drone integrated behind the rear seats. Developed in collaboration with Aerofugia’s consumer electronics brand Hoco Flow, the concept drone can be deployed while the car is moving, to record the perfect driving sequence.

Polestar engineers have developed a specialised aerofoil that raises behind the rear seats to create a calm area of negative pressure that allows the drone to take off when the car is on the move. The drone operates autonomously, automatically following the car at speeds up to 90 km/h, and the driver can choose between an atmospheric sequence – great for a coastline cruise – or a more action-filled sequence with a sportier expression. After filming, the drone can autonomously return to the car. Video clips can be edited and shared directly from the 15-inch centre display when the car is parked.

“We wanted to emphasise the experience you can have with a car like the Polestar O2 in new and unusual ways,” continues Maximilian Missoni. “Integrating an autonomous cinematic drone was something that allowed us to push the boundaries on the innovation front. Not needing to stop and off-load the drone before filming, but rather deploying it at speed, is a key benefit to this innovative design.”

Polestar O2 continues the strong foundations laid by Polestar Precept as a vision of the company’s future design, technology and sustainability ambitions. Polestar plans to launch three new cars over the coming three years, starting in 2022, each of which has potential to gradually realise some of the ideas presented by these concept cars.

Polestar also intends to list on the Nasdaq in a proposed business combination with Gores Guggenheim, Inc. (Nasdaq: GGPI, GGPIW, and GGPIU), which is expected to close in the first half of 2022.

Advanced Driver Assist Systems (ADAS) have grown from a premium vehicle feature to a capability ...

Proactive, multi-modal Cerence Co-Pilot goes beyond voice to deliver an ..

ABB’s new Terra 360 is a modular charger which can simultaneously charge up to four vehicles with dynamic ...

The all-new and all-electric Lotus Eletre is a striking and progressive Hyper-SUV – the first of a new breed of pure ..