>> Continental is testing the dynamic electronic horizon (eHorizon) on the roads for the first time with demo vehicles.
>> The swarm principle: Connected vehicles provide the basis for detailed and highly up-to-date route information from the cloud.
>> Applications range from next generation advanced driver assistance systems and efficiency enhancement up to automated driving.

The technology company Continental presented the first set of driving test results for the connected, dynamic electronic horizon (eHorizon). For vehicles it is becoming increasingly important to know what lies ahead, and today’s traffic reports and digital road maps are no longer enough. What is needed is much more precise information about road characteristics such as gradients, curve radii, temporary speed limits and other traffic signs, lane changes due to construction work, and other important information. With its “dynamic eHorizon”, Continental is offering a solution that can fulfill the information requirements of vehicles.

“The Internet will not only extend the selection of on-board infotainment, it will also directly improve the vehicle. The principle behind this: the better the information base, the safer, more efficient, and more comfortable the vehicle,” says Ralf Lenninger, head of System Development, Innovation, and Strategy in Continental's Interior division. “In the future, vehicles will gather extremely accurate, up-to-date, and reliable information about the road network in an “Internet of cars”, and make this information immediately available to all road users.” 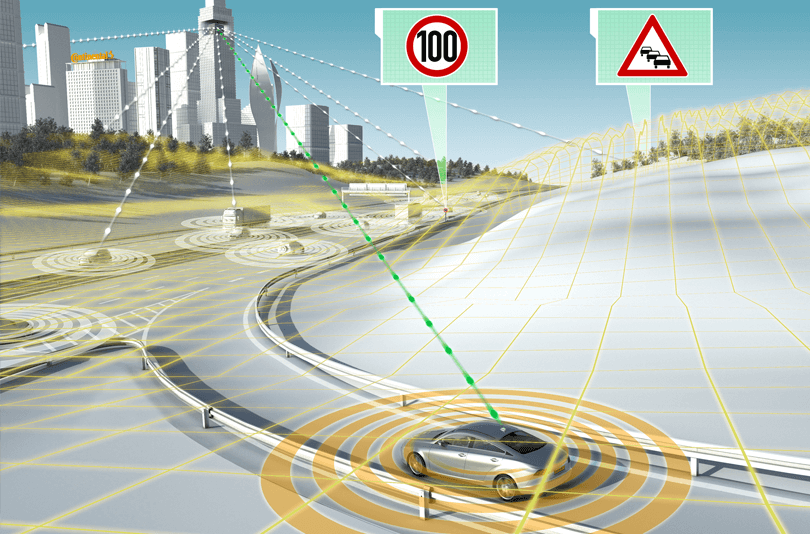 The potential for improvement already includes current advanced driver assistance systems such as the adaptive cruise control, efficiency optimization of conventional and electrified drives, and will also support the gradual approach towards automated driving. In the future, these improvements will allow the electronic horizon to make an accurate assessment of a route, stating whether highly or even fully automated driving is suitable for the upcoming route, or whether the driver can only switch to partially automated driving and must still remain responsible for the vehicle.

Continental is testing the reliability of the dynamic eHorizon and its various applications in a series of new demo vehicles. The vehicles are connected to Continental's backend platform via a mobile radio module, allowing data exchange in both directions. The on-board systems thereby constantly receive updated route and surroundings information such as additional topographical data or temporary speed limits.

The connected vehicles can also feedback information from their own sensors and on-board systems to the cloud. In doing so, the vehicles make their own contribution to constantly improving and updating the map material and the additional information. Continental developers are using this “swarm” principle as a basis for numerous intelligent applications.

A range of applications for the dynamic eHorizon

One possible application has been demonstrated by Continental's test vehicles. Through the use of cameras, they detect variable speed limits and temporary traffic signs and report these to the backend, where the information is verified and aggregated. If the reliability of the information is confirmed, for example, by reports from multiple vehicles, the system can then update the map in the backend and transmit it to all connected vehicles in the affected area. This allows tile-based map updates, which for instance are used for next generation assistance functions. The high-resolution road map stored locally in the vehicle will be supplemented as required by sections of a HD map that is stored and continuously updated in the backend. The system therefore only ever transmits the map section that is directly relevant to the current whereabouts of the vehicle, keeping the transmission of mobile data traffic low but still always updating the vehicle with the most recent map data.

Continental's new test vehicles based on mid-range vehicles allow the functions described to be demonstrated and tested in practice. The connection to the backend and the data analysis carried out there can also be put to the test using the demo vehicles.

“The dynamic eHorizon allows Continental to offer a solution with which vehicle manufacturers can perfect their advanced driver assistance system options, future drive technologies, and traffic concepts,” says Lenninger. “The high-performance backend system ensures that all users of this technology benefit from the up-to-date and increasingly detailed route data while also actively contributing to improving the accuracy and data quality of this information.”

The data from the eHorizon makes numerous vehicle functions possible or improves their performance. This is why trucks have already been using the static eHorizon from Continental since 2012. They use eHorizon data to adjust their engine power based on the altitude profile of a route, which according to Continental estimates saves an average of 1,500 liters of diesel per year. The eHorizon can also provide useful information to hybrid vehicles with at least a 48-volt system, allowing the drive system to be used as efficiently as possible. Fully electric vehicles can use the information from the eHorizon in order to precisely calculate their range in advance. Thanks to eHorizon, vehicles with adaptive cruise control can adjust their speed for variable speed limits or curve radii, meaning that drivers only need to steer. The eHorizon also enables functions such as the Augmented Reality head-up display. The exact information on the course of the road are being used to generate the augmentation effect and display for example the navigation arrow in the head-up display as if it was painted directly on the turning lane.